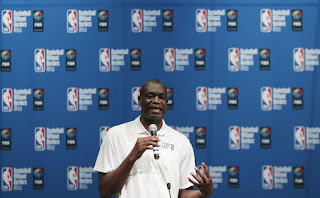 In this Aug. 1, 2018, file photo, Dikembe Mutombo speaks during the opening ceremony of Basketball without Borders Africa in Johannesburg, South Africa. U.S. health officials are turning to a basketball hall of famer for help in one of the deadliest Ebola outbreaks in history. Dikembe Mutombo is regarded as one of the greatest defensive players in NBA history and is a well-known philanthropist in his native Congo. He recorded radio and video spots designed to persuade people to take precautions and get care that might stop the disease’s spread. (AP Photo/Themba Hadebe)

NEW YORK (AP) — Unable to send disease fighters to help battle one of the deadliest Ebola outbreaks in history, U.S. health officials are turning to basketball hall of famer Dikembe Mutombo for help.

Mutombo, regarded as one of the greatest defensive players in NBA history and a well-known philanthropist in his native Congo, recorded radio and video spots designed to persuade people to take precautions and get care that might stop the disease’s spread.

The U.S. Centers for Disease Control and Prevention began posting the spots Monday on its YouTube channel and on the agency’s website . Officials are trying to get radio and TV stations in the Democratic Republic of Congo to air them.

About 2,100 people have been reported ill — and nearly 1,500 have died — since an Ebola outbreak was declared in August in eastern Congo. It is the second deadliest outbreak of the lethal virus, which jumps from person to person quickly through close contact with bodily fluids.

Rebel attacks and community resistance have hurt Ebola response work in Congo. A World Health Organization doctor was killed in April, health centers have been attacked and armed groups have repeatedly threatened health workers. Because of safety concerns, the U.S. State Department last year ordered CDC disease specialists to stay out of the outbreak areas.

Mutombo, who moved to the U.S. in the 1980s intending to pursue a medical degree, told The Associated Press he understands where the distrust comes from.

“Someone who doesn’t look like you, who doesn’t think like you, who is not from your village, who is from other places, just walk to your village with a nice beautiful white truck and telling you ... ‘inject this chemical into your body to protect you from this deadly virus.’ That’s where there’s a fight. This is where we’re having a conflict,” he said.

“How do you that build trust? That’s the big problem we’re having in the Congo,” he said. “I believe as a son of Congo, I think my voice can be heard. Because everyone in the country knows my commitment to the humanity and the health.”

The idea for the PSA was sparked in February when Mutombo, a member of the CDC Foundation’s governing board who lives in Atlanta, was talking with Dr. Robert Redfield, the CDC’s director.

“We are deeply appreciative of his interest to try to get accurate information to the community,” Redfield said.

Mutombo, who turns 53 on Tuesday, previously did public service announcements focused on polio and yellow fever. A dozen years ago, his foundation established a 300-bed hospital on the outskirts of his hometown of Kinshasa.

The new spots were recorded in Kiswahili, French and Lingala. They talk about recognizing the early signs of Ebola, early treatment and prevention measures.

AP reporter Cody Jackson in Atlanta contributed to this report.