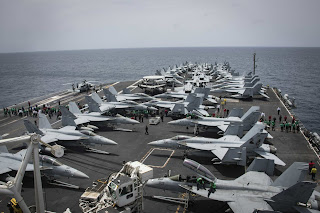 In this Sunday, May 19, 2019, photo released by the U.S. Navy, sailors partake in a foreign object and debris walk-down on the flight deck of the Nimitz-class aircraft carrier USS Abraham Lincoln. (Mass Communication Specialist 3rd Class Garrett LaBarge/U.S. Navy via AP)

THE ASSOCIATED PRESS
DUBAI, UNITED ARAB EMIRATES (AP) — President Donald Trump has warned Iran not to threaten the U.S. again or it’ll face its “official end,” shortly after a rocket landed near the U.S. Embassy in Baghdad overnight.

The tweet comes amid heightened tensions between the U.S. and Iran, the culmination of Trump’s decision a year ago to pull America out of Tehran’s nuclear deal with world powers.

Trump’s tweeted early Monday: “If Iran wants to fight, that will be the official end of Iran. Never threaten the United States again!”

Trump did not elaborate, nor did the White House. However, the tweet came after a rocket landed less than a mile from the sprawling U.S. Embassy in Baghdad in the Iraqi capital’s heavily fortified Green Zone Sunday night.