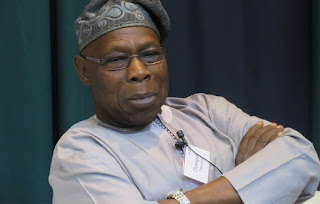 OLEH, DELTA (NIGERIA NEWS) -- The Boko Haram has been a terrorist group that has been disturbing the peace in Nigeria since 2011 during the Goodluck Jonathan regime with various suicide bombing carried out. The formal President of Nigeria, Olusegun Obasanjo reveals how President Buhari has been empowering the terrorist group, Boko Haram, NIGERIA NEWS reports.

Obasanjo speaks at the 2nd session of the Synod which took place at St. Paul Anglican church, Oleh, Delta state. He addressed on the topic titled, “Mobilizing Nigeria’s human& natural resources for national development and stability”. He said Buhari attempts paying a ransom as a form of negotiation in which the terrorist group does not succumb to take.

The few speeches concerning how Buhari administration has taken the fight against the terrorist group with levity hands by Olusegun Obasanjo is as quoted below:

“They have both incubated and developed beyond what Nigeria can handle alone. They are now combined and internationalized with ISIS in control. It is no longer an issue of lack of education and lack of employment for our youths in Nigeria which it began as, it is now West African fulanization, African Islamization and global organized crimes of human trafficking, money laundering, drug trafficking, gun trafficking, illegal mining, and regime change.

“Yet, we could have dealt with both earlier, and nip them in the bud, but Boko Haram boys were seen as rascals not requiring serious attention in administering holistic measures of stick and carrot. And when we woke up to reality, it was turned to industry for all and sundry to supply materials and equipment that were already outdated and that were not fit for active military purpose.

“Soldiers were poorly trained for the unusual mission, poorly equipped, poorly motivated, poorly led and made to engage in propaganda rather than achieving results. Intelligence was poor and governments embarked on games of denials while paying ransoms which strengthened the insurgents and yet governments denied payments of ransoms. Today, the insecurity issue has gone beyond the wit and capacity of the Nigerian Government or even West African Governments”.