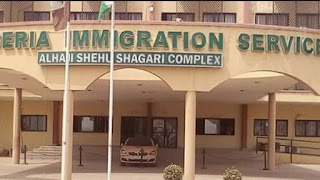 The Controller, Katsina state Command, Mr Ajisafe Joshua Olusola, while briefing newsmen on the arrest which he said is the second within five days, said the mission of the traffickers and their victims is to cross the border to Niger republic from where they will then move into Libya.

He listed the names of the three unrepentant human traffickers to include: Emeka Gideon Okaeri, 39 from Imo state, Obinna Emmanuel, 30 from Abia state and Obumese Murphy obi, 40, from Imo state.

The Controller further disclosed that the leader of the trafficking cartel, Emeka Okaeri have been living in Libya for the past 9 years and a frequent traveler criss-crossing Niger, Libya and Nigeria

He said ’’Emeka represents a trafficking cartel based in Libya and Nigeria and who specializes in trafficking and smuggling. All the suspected human traffickers, smugglers and rescued persons are Nigerians and in possession of their travelling documents’’

‘’According to Emeka, the two ladies, Justina and Chinonso were connected to him by one man, who is presently residing in Libya. The man in Libya is the one sponsoring the victims’ journey while Emeka is the one facilitating the journey’’

The controller assured that the arrested traffickers and their victims will be handed over to NAPTIP zonal Office in Kano, the agency with the core mandate on trafficking in persons, for further investigation, rehabilitation, counseling and prosecution as they may deem appropriate.
Human Trafficking Immigration News Desk Nigeria The Nation

Just like that, something pops up and becomes a big deal. Just like that America and its creativity can pop up with something about nothing, and all of a sudden people will be having a blast with an amazing enterprise. Just like that some young fellas would sit under a tree on campus grounds and put their thoughts together and, before you know it they are somewhere in a neigborhood cafe talking about their stocks and millions of dollars stashed in the bank. "And how come this is just a piece of cake?" "The land of opportunity -- no doubt, making something out of nothing." "So what in God's sake are you talking about?" "I am talking about all the above subject-matter and before you start wondering, it is none other than Twitter, the newest arrival on social networking and how the internet brigades are all crazy about it. It has driven NPR's Jim Lehrer and Andrea Seabrooks nuts. ABC News Chief Washington correspondent George Stephanopoulos