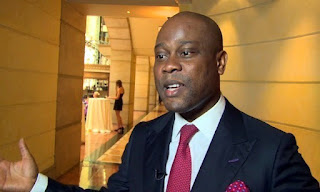 LAGOS (PREMIUM TIMES) -- The arraignment of the Group Managing Director of Access Bank Plc, Herbert Wigwe, before an Ikeja Division of the Lagos State High Court was stalled Thursday due to the absence of the defendants.

The defendants were accused of a $6.3million fraud.

According to the judge, Hakeem Oshodi, proceedings cannot continue and neither can preliminary objections be heard when the defendants to be arraigned are not all present in court.

The judge was responding to counsel to the fourth defendant, Paul Usoro, a Senior Advocate of Nigeria, who sought to raise a preliminary objection challenging the jurisdiction of the court to hear the matter.

When the matter was called, only two of the defendants were in court.

Consequently, Mr Oshodi, adjourned the matter till June 3, for the hearing of the preliminary objection.

The defendants are facing a four-count charge bordering on conspiracy, obtaining by false pretences, fraud, and stealing, preferred against them by the Police Special Fraud Unit (SFU).

The prosecutor, Emmanuel Jackson, a Chief Superintendent of Police, said the defendants committed the offences between January and December 2015.

He said they conspired with one another and with Augusta Energy of Geneva, Switzerland, to defraud Top Oil &Gas Development Ltd to the tune of over $6.3million.

Mr Jackson said the defendants obtained the said money from Top Oil & Gas Development Ltd by falsely telling the chairman of the company, Don Etiebet, and other officers of the company, that Cast Oil and Gas Ltd had a contract with Augusta energy of Geneva Switzerland.

They said the contract was for the supply of 10,000 metric tones of automatic Gas Oil (AGO) by Augusta Energy of Geneva to Cast Oil & Gas, and that the price of the products was $6,382,665.71. They allegedly claimed Top Oil & Gas was the consignee of the products.

Mr Jackson also said the defendants had also informed the complainant that after financing, purchasing, supply and importation of the said products into Nigeria from Switzerland, it would take delivery of same in its capacity as a consignee of the product and authorised Cast Oil &Gas to sell the said products on its behalf.

He further said the defendants also ensured that Top Oil & Gas Development recovered the monument invested for the purchase, supply, and importation of the said products, which they knew was false but induced the complainant to invest the said sum in the purported business, and fraudulently converted it to their own use and benefit.

According to the prosecutor, the defendants stole $6.3million, the property of Top Oil &Gas Development Ltd, which they deceived company to pay to Augusta Energy of Geneva Switzerland on behalf of Case Oil &Gas as the cost price of 10,000 metric tonnes of Automotive Gas Oil (AGO).

Meanwhile, the product which Top Oil &Gas Development Ltd, was deceived to pay for, was not supplied or imported into Nigeria, but they instead converted the money into their own use and benefit.

Mr Jackson said the alleged offences are contrary to Sections 422 of the criminal code, Cap C38, Laws of the Federation 2004, 8 (a) of the Advanced Fee Fraud and other related offences Act, No 14 of 2006.