Nigeria Accused Of Gagging The Press With New Accreditation Rules 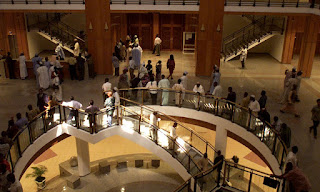 Nigerian journalists covering the National Assembly in Abuja, above, claim the new rules are designed to stop them reporting on government proceedings. Photograph: Brennan Linsley/AP

ABUJA (THE GUARDIAN) -- Strict new conditions for covering government proceedings and the re-arrest of a prominent journalist on terrorism charges have raised concerns about deteriorating press freedom in Nigeria.

To be permitted to report on the country’s National Assembly, the highest law-making authority, journalists will now have to prove that their media outlet has a daily circulation of 40,000 copies or online media 5,000 daily views.

Journalists will also have to show they have two years’ experience covering the assembly on a temporary basis, be members of the Nigerian journalists’ union, and fit other criteria listed by the assembly’s director of information, Emmanuel Rawlings Agada.

The new rules, due to take effect on 11 June, are “primitive, undemocratic and blatantly anti-press and anti-people”, the Nigerian Guild of Editors said in a statement.

“It is a scurrilous attempt to gag the press in a democracy and it cannot stand,” said Mary Atolagbe, the guild’s general secretary. She called on media across the country to “rise up and reject” the new rules.

The Committee to Protect Journalists (CPJ) said the Nigerian authorities should withdraw the new requirements and “ensure that future regulations do not unduly limit freedom of the press and access to information”.

Several sources said the reason the new conditions were being put in place was the widely reported interrogation of the assembly’s clerk by the anti-corruption watchdog, the Economic and Financial Crimes Commission, something it is said caused him much embarrassment.

Nigerian journalists covering the National Assembly claim the new rules are designed to stop them reporting on government proceedings.

“If they go ahead with these guidelines, only very few could survive it,” said Abdallah Bello, a radio journalist who reports on the National Assembly. “I can also tell you that they are government-owned media outlets … while private media outlets will be left in the cold.

“It’s so shocking that the National Assembly management is coming up with such draconian guidelines, at a time when more hands are needed … We struggle to meet up with stories at the National Assembly. Five to seven committees will be sitting at the same time and journalists are expected to cover them all and this aside (from) plenary sessions.”

The assembly was trying to force the media to be answerable to it, said Huram Reuben Lokodi, of Gotel Africa TV.

“The stringent conditions will make it impossible for most of us to scale through,” he said. “The media staff strength at the National Assembly is very low – about 80 at the Senate and close to the same number at the House of Representatives. Political analysts have been complaining about the National Assembly being underreported and we expect to see ways of increasing the number of journalists and not its reduction, as is the case with the new guidelines.”

Activists said another blow to press freedom was the arrest of journalist Jones Abiri last Wednesday, on charges of terrorism and economic sabotage.

The charges come nine months after Abiri was freed from the custody of the State Security Service, after spending two years there without trial.

Abiri was accused of sending threatening messages to Shell and Agip, and leading a gang aiming to blow up oil pipelines in Bayelsa state, allegations he strongly denies. Held incommunicado for all his time in custody, Abiri was released last summer following a long campaign by local and international journalists, press freedom organisations and human rights campaigners.

“The re-arrest of Jones Abiri showcases once again the brazen willingness of the Nigerian government to intimidate and harass the press,” said Angela Quintal of the CPJ. “Nigerian authorities should immediately release Jones Abiri and permit him to continue his work without fear of retaliation.”
News Desk Nigeria Press Press Release The Guardian