MacKenzie Bezos Will Donate Half Her Fortune To Charity 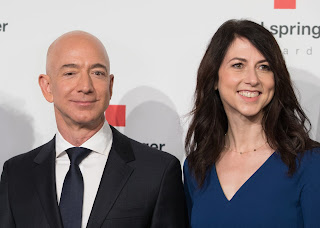 
MacKenzie Bezos is the latest billionaire to sign the Giving Pledge and commit at least half of her $35 billion fortune to charity. Bezos joins Mark Zuckerberg, Richard Branson, and Robert F. Smith on the list of donors to Bill Gates and Warren Buffett’s initiative.

In a letter published by Giving Pledge, Bezos writes of having “a disproportionate amount of money to share” and credits “an infinite series of influences and lucky breaks we can never fully understand” for her wealth.

The Giving Pledge began in August 2010 when 40 of America’s wealthiest individuals made a commitment to give more than half of their wealth away. The scheme is described as an “open invitation for billionaires … to publicly dedicate the majority of their wealth to philanthropy”.

Although MacKenzie Bezos doesn’t list any particular causes she writes, “My approach to philanthropy will continue to be thoughtful. It will take time and effort and care. But I won’t wait. And I will keep at it until the safe is empty.”

Who is MacKenzie Bezos?

MacKenzie Bezos will become the world’s third richest woman later this year after announcing the terms of the divorce settlement with her husband and Amazon founder Jeff Bezos.

Although amicable, the settlement is biggest of all time with MacKenzie receiving 4% of Amazon stock, worth more than $35 billion on April 4 2019.

MacKenzie is also a successful novelist, described by author Toni Morrison as “one of the best students I’ve ever had.” She met Jeff Bezos while both were working at hedge fund D.E. Shaw in New York and they married in 1993. MacKenzie Bezos confirmed her divorce on twitter, stating she was, “Grateful to have finished the process of dissolving my marriage with Jeff.”

L’Oreal heiress Francoise Bettencourt Meyers is the world’s richest woman with a net worth of $53.6 billion, while Alice Walton of Walmart fame is the only other woman ahead of MacKenzie with a $47.1 billion fortune.