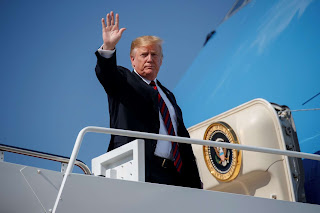 President Trump waves as he boards Air Force One for a trip to New York to attend a fundraiser, Thursday, at Joint Base Andrews in Maryland. Image: Evan Vucci/AP

“If you like high taxes and if you like crime you can vote for him, but most people aren’t into that,” the president said to the camera.

Trump’s use of taxpayer-funded transportation to post a political message raises some legal and ethics questions. But possibly the greatest crime, some experts say, is the breakdown of norms.

“It’s entirely inappropriate, and it is against historical norms for a president to be campaigning from Air Force One,” said Paul S. Ryan, vice president of policy and litigation at Common Cause, a nonpartisan watchdog group. “Most presidents have had enough respect for the office to try to separate campaigning from formal duties. Donald Trump is not such a president.”

The president and the vice president are exempt from the Hatch Act, the law forbidding executive branch officials from participating in certain political activities. They are, however, bound by campaign finance rules, but those are rarely enforced.

Trump made the video while traveling to a fundraiser in New York. According to campaign finance laws, his campaign is required to pay the American people back for that flight. If he did official business as part of that trip, then there’s a formula the government uses to determine how much the campaign still owes.

“While an incumbent president has considerable leeway in mixing official expenses for security purposes with campaign expenses, the video itself has no other purpose than serving as a campaign ad,” said Craig Holman of Public Citizen. “It is very reasonable to expect Trump’s campaign to shoulder the cost of the video.”

After Trump, or an aide, posted the de Blasio-blasting video, the D.C.-based watchdog group, Citizens for Responsibility and Ethics in Washington, or CREW, tweeted: “Nice political ad filmed on Air Force One. You now legally need to reimburse the Treasury for the use of Air Force One on a political trip. Since you had no problem tweeting out the video, you should have no problem tweeting out the receipts when you reimburse the taxpayers.”

But even more than the potential campaign finance violation, Virginia Canter, CREW’s chief ethics counsel, said what bothers her most is the president’s use of the presidential seal in a political pitch.

It is actually illegal under the U.S. code to use the seal “for the purpose of conveying, or in a manner reasonably calculated to convey, a false impression of sponsorship or approval by the Government of the United States.”

Canter said the president has discretion over how the seal is used, but only in respect to his official activities.

“I think it raises the specter of whether a violation occurred,” she said.

Canter said she was also bothered by the backdrop of Air Force One for political purposes. She said she considers it hallowed ground — the place where Lyndon B. Johnson took the presidential oath of office just after John F. Kennedy was killed.

“This is serious to me,” she said.

But based on past events, none of these ethics experts believe Trump or his staff will be held accountable.

The penalties for breaking the Hatch Act range from a formal reprimand to job termination. For a White House employee, the Office of Special Counsel makes a recommendation of a penalty to the president and it’s up to him to act on it, Ryan said.

“Senior administration has repeatedly violated the Hatch Act, so they’ve gotten reprimands from the Office of Special Counsel, but they keep it doing it over and over again,” Ryan said. “The problem is that the president doesn’t care about ethics laws.”
Donald Trump News Desk Washington Post