I Am Leaving N42.5 Billion For Ihedioha To Govern Imo, Says Okorocha 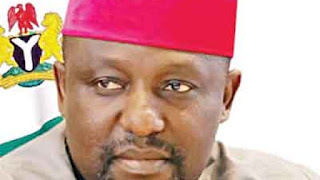 Okorocha disclosed this while swearing in the new Head of Service, Mrs. Ngozi Ama Eluwa; 11 new Permanent Secretaries and Accountant-General, Donald Igbo, at the Government House in Owerri. He said N8.1 billion is meant for the payment of salaries and capital projects, while N5.2 billion would be for payment of pension arrears.

But the incoming administration of the People’s Democratic Party (PDP) through the state’s Publicity Secretary of the party, Damian Oparah, alleged that Okorocha would leave with debt of over N100 billion and uncompleted projects, among other myriad of problems.

The state Publicity Secretary of the party, Damian Oparah, who spoke with The Guardian, expressed disgust over the comment.“It is when we see it we know if it is true. He is leaving N45.5 billion when he is also leaving over N100 billion debt; over N200 billion worth of uncompleted projects and problems he created in the state. Look at Owerri each time it rains how the entire place is.” Oparah said.

The outgoing Imo State governor, who accused the PDP chieftains of sending petitions to the Economic and Financial Crimes Commission (EFCC), which made the agency to block the funds for the payment of pension arrears and others at the point of commencing payment, advised the new appointees to reposition the state civil service, shun corruption and keep their integrity.

He said: “Remember God in discharging your duties. Discharge your duties without fear or favour and also defend your state when the need arises. I gave this state my best. I will do all I can to support the incoming government. Imo State Government has kept aside a total of N4.5 billion for the in-coming government, and for that reason, I will set up a sub-committee to make sure that the projects they are attached to come to fruition even when I am out of office or when I will not be available because government is a continuum.”
Guardian Imo State Newsroom Owerri Rochas Okorocha