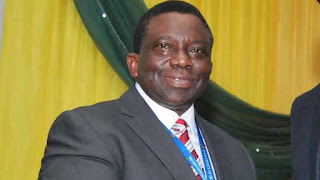 ABUJA (THE GUARDIAN) --  Nigeria’s health minister Isaac Adewole has disagreed with claims made by labour and employment minister who said doctors were free to leave the country.

Ngige, who spoke on a Channels Television programme in April said, “I am not worried about doctors leaving the country. We have surplus. If you have surplus, you export.”

He claimed that Nigeria has 350,000 medical doctors, far more than the 260,000 which, according to him, the World Health Organisation (WHO) prescribes for the country.

“Who said we don’t have enough doctors? We have more than enough, they go out, they sharpen their skills. You can quote me. There is nothing wrong with them travelling out,” Ngige said.

The minister’s claim sparked outrage in Nigeria’s public domain. And the latest reaction to the claim is from the health minister, Adewole, who said doctors leaving the country for greener pastures was worrisome.

“I am not particularly happy with the latest trend of doctors leaving the country to other lands for greener pastures,” Nigeria health minister Isaac Adewole said.

The health minister while lamenting brain drain in the health sector promised workers of better welfare.

“We shall continue to ensure the welfare of the health workforce is improved,” Adewole said.

He, however, disclosed that the government is making efforts to engage newly graduated doctors through an internship programme in 2019.

Adewole, who decried the inability of state governments to recruit and keep medical doctors, specialists, in their secondary and tertiary care hospitals, urged the states to support the federal government in equipping the health sector.

The health ministers lament of the brain drain is at odds with his statement in September 2018, which was heavily criticised.

Adewole received media and public backlash for asking medical students not to centre their aspiration to be doctors but should also try their hands on other professions including farming.

“It might sound selfish, but we can’t all be specialists. We can’t. Some will be farmers, some will be politicians.