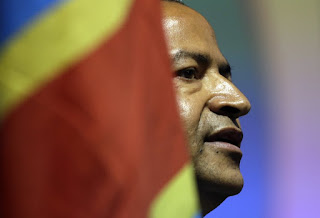 In this Monday, March 12, 2018 file photo, Congolese opposition leader Moise Katumbi speaks to delegates at a three-day forum in a resort hotel near Johannesburg, South Africa. Katumbi is expected to return to Congo on Monday May 20, 2019, one of a number of political exiles coming home after a new president took office this year. (AP Photo/Themba Hadebe, File)

KINSHASA, CONGO (AP) — Congolese art collector and businessman Sindika Dokolo feared being jailed if he returned to his country as an opponent of the longtime president.

During his five years in exile, a court convicted him in absentia on charges related to a real estate dispute which he says were politically motivated.

All that changed when longtime President Joseph Kabila stepped down earlier this year after nearly two decades in office and handed over power to opposition figure Felix Tshisekedi.

“Now I have the opportunity to defend myself, to clear my name and expunge this conviction,” the 47-year-old Sindika told The Associated Press during a recent interview in Congo’s capital, Kinshasa. The judge who oversaw his case had been found not qualified and was dismissed and jailed last year.

Sindika is one of a growing number of Kabila opponents who say they now can come home after years in exile.

In the most high-profile return yet, onetime presidential hopeful and former governor Moise Katumbi is expected to come home on Monday after he was blocked from entering the country last year.

Katumbi was convicted in absentia in 2016 for real estate fraud and sentenced to 36 months in prison, a move his supporters said was aimed at derailing his presidential ambitions. He fled the country after accusing authorities of trying to poison him.

Last month, however, his conviction was overturned and he was issued a Congolese passport.

Human rights groups have welcomed the more open climate ushered in by Tshisekedi, who recently met with Sindika. The new president has released hundreds of detainees and ended a ban on public protests.

“This is a good start for the rule of law,” he said. “The cases that led to the convictions of Sindika and Katumbi were brought forth by the Kabila regime to prevent them from returning to the country. Their convictions were a political decision; it was a travesty of justice.”

Still, some concerns remain about Tshisekedi, whose election was not without controversy as another opposition candidate, Martin Fayulu, alleges he was the true winner. Critics have accused Tshisekedi of making a deal with Kabila to secure victory, and they fear the former president wants to continue in Congo’s political affairs.

Those fears were exacerbated when Kabila’s party dominated legislative elections, giving it the power to choose Congo’s next prime minister.

Sindika, who is married to Isabel dos Santos — the daughter of the former Angolan leader and believed to be the richest woman in Africa — says he now wants to use his business skills to help promote economic development in Congo.

The economy of the vast country rich in minerals has been undermined by decades of dictatorship and allegations of plundering.

“I will absolutely contribute to this effort of recovery of my country,” Sindika said. “Job creation is what I know how to do. It is what I learned to do.”