At 100, UCLA Celebrates, Takes Stock, And Looks Ahead 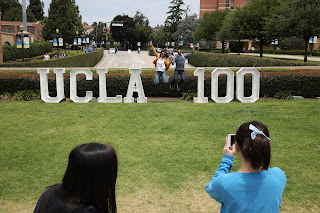 LOS ANGELES (LOS ANGELES TIMES) -- As UCLA kicked off its centennial celebration on Saturday, the university’s pride was clearly on display: Banners throughout campus lauded its faculty’s 14 Nobel prizes, its $1 billion in annual research funding and its myriad national sports championships.

But that, according to Chancellor Gene Block, is just the beginning.

“I hope 100 years from now, we’ll celebrate the successes of all six UCLA campuses,” Block said to a room full of alumni, who cheered and laughed at the thought of it.

Joined by more than 5,000 people on campus for Alumni Day, Block — along with chancellors emeritus Albert Carnesale and Charles E. Young — addressed some of the most pressing issues facing UCLA in its 100th year, including the rising cost of tuition and how best to serve a diverse student body.

While Block supported the increase, saying it was necessary to maintain UCLA’s academic excellence, he acknowledged that diversity is “the power of coming to this university” and said that “it can be fragile.”

Chon Noriega, director of the campus’ Chincano Studies Research Center, said UCLA had made great leaps over the years in terms of diversity and social justice, but has much work to do in order to keep up with the state’s changing demographics.

In terms of demographics, the university is at a tipping point that Los Angeles County has already surpassed, Noriega said.

UCLA is “moving quickly to becoming a Hispanic-serving institution” and it should “prepare for that change that’s already underway,” Noriega said.

In recent months, UCLA has faced a different kind of struggle: the college admissions scandal, which included a UCLA student who was admitted as a soccer recruit despite a lack of high-level soccer experience.

Block spoke candidly about the scandal on Saturday, calling for reform of the athletic system at UCLA.

“I was disappointed … but maybe not surprised,” Block said. “There’s always people looking for ways around the normal process. [I was] a little demoralized that we had this vulnerability.”

Now listed by U.S. News and World Report as the top public university in the country, UCLA was founded on May 23, 1919 when the UC Regents made the then-Los Angeles State Normal School the southern branch of the University of California. The first UC campus is in Berkeley.

Among the members of the centennial graduating class is Ariana Morales, an international development studies major.

“To be one of the top [schools] in the nation, that’s something to be proud of,” she said after taking graduation photos with her friends in Royce Quad.

As evening fell, students and alumni gathered to watch the finale to a day of celebration: Royce Hall illuminated in images depicting the school’s history and the accomplishments of its innovators and alumni.

“We have reached a crest; a vantage point of the centuries behind us and centuries ahead,” the narrator said. “We now must ask, how will the past illuminate the future?”

For now, UCLA has a few ideas in mind.

As part of its Grand Challenge Initiative, the university has set some goals: to eliminate depression by the end of the century and to shift Los Angeles to 100% local water and renewable energy.