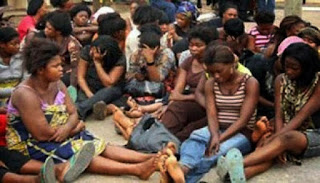 Image via The Guardian

LAGOS, NIGERIA (CNN) -- The UK government and Nigeria's anti-trafficking agency launched a new media campaign to prevent women and girls from being exploited and sold into modern-day slavery.
The Department for International Development (DFID) said the 'NotForSale' campaign aims to encourage Nigerians to find jobs at home instead of risking their lives to travel to foreign countries in search of work.

DFID said it was committed to ending human trafficking for all nations, and it was working with the UK National Crime Agency and the Nigerian government to tackle the "root causes of dangerous migration," while preventing vulnerable women and girls from being targeted by traffickers.
Julie Okah-Donli, director general of the National Agency for the Prohibition of Trafficking in Persons (NAPTIP) told CNN many vulnerable Nigerian girls, some as young as 10, were being lured by human traffickers to work as domestic help and servants in Britain.

"The UK is a destination for forced labor. These traffickers take Nigerian girls from villages and disguise them as their children, but when they get to the UK, they don't let them step of the house for years and force them to clean and cook. There are cases where these victims were sexually exploited," Okah-Donli told CNN.

She said posters for the campaign, which feature inspirational stories of successful Nigerian women, would be placed in schools, mosques, malls, and billboards in Nigeria's Edo and Delta states, where human smuggling rings operate with impunity.

Edo state in southern Nigeria is one of Africa's largest departure points for thousands of migrants fleeing economic hardship for better opportunities abroad.

The West African nation itself is among top destinations where thousands of people are trafficked illegally to destinations abroad, especially in Europe, and most of the victims are sexually exploited and forced into manual labor to finance their journey.

The International Organization for Migration (IMO) estimates that 91% of victims trafficked from Nigeria are women; their traffickers have sexually exploited more than half of them.

A fact-finding mission by Nigeria's anti-trafficking agency in January said it found that more than 20,000 Nigerian girls had been sold as sex slaves in Mali by traffickers who deceived them with offers of jobs in Malaysia.
Human Trafficking Lagos Nigeria Society