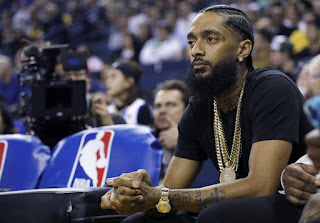 NEW YORK (AP) — Social media sleuths are lighting up their streams with conspiracy theories connecting the shooting death of Nipsey Hussle and an herbalist who claimed back in the 1980s that he had a cure for AIDS and other ailments.

Hussle, who was killed Sunday in Los Angeles, was reportedly working on a documentary about Dr. Sebi, who in 1985 beat New York allegations of practicing medicine without a license after his healing center ran newspaper advertisements claiming his diet of low alkaline foods cured patients with AIDS.

Sebi, born Alfredo Bowman, died in a Honduran jail cell in 2016 after his arrest for carrying large sums of cash into his native country. He was 82. The official cause was pneumonia. Some think Hussle’s death is connected to the Sebi documentary because of a belief that there were forces trying to silence Sebi’s health message, though there is no direct evidence of that.

Nick Cannon posted on Instagram that he’d like to carry on Hussle’s work, not directly referencing the film. He has since posted photos and videos of Sebi along with mentions of Hussle. A Cannon representative said Tuesday that Cannon had not yet reached out to Hussle’s loved ones about the film project, wanting to give them time to grieve.

Police have said they believe the man suspected of shooting Hussle outside his clothing store had a personal dispute with the rapper.

As for Sebi, one Twitter user, Chanda Prescod-Weinstein, summed it up this way:

“The real tragedy about Dr Sebi is that white scientists, including medical doctors, have experimented so much on Black people that a lot of Black people don’t trust medicine or any other science. So be judgmental ... but judge how we got here: whiteness.”
Los Angeles Society The Associated Press

BY AMBROSE EHIRIM The last time I was in the Bay Area, I did not pay much attention to the goings on, particularly Oakland from around which I hadn't been anywhere in the city for quite some time. It had been in and out, business as usual, so, not much to talk about in that regard. But this time around, a whole lot turned out differently. I wasn't aware of the turn around of things in downtown Oakland and for not to have checked in for a while, I was impressed. The city changed, indeed! The raggedy, skid row, home of the Black Panthers and the classless sleep on your door step, ghetto-crawling neigborhood is no longer what it used to be. Oakland is totally transformed, and thanks to Jerry Brown who as Mayor of Oakland saw the necessary steps required to making things happen for folks long abandoned. The story of Oakland and its overnight transformation is overwhelming. As it happened, the 9th Annual Arts & Soul Festival in Oakland had to be my calling since I have n