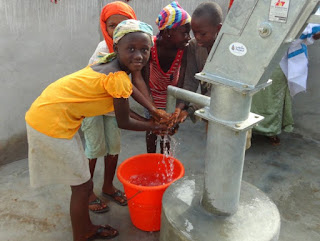 The Water crises in Africa image via The Water Project

In the poorest countries, about half of facilities do not have basic water services - meaning water delivered by pipes or boreholes that protect it from faeces - putting birthing mothers and newborns in particular danger, new data showed.

The World Health Organization (WHO) and U.N. Children’s Fund (UNICEF) said more than 1 million deaths a year were associated with unclean births, and 15 percent of all patients attending a health facility developed infections.

“Hospitals are not necessarily points of care where you can heal, but points of almost infection. (We) are very alarmed by this,” WHO public health co-ordinator Bruce Gordon told a media briefing in Geneva.

Worldwide, nearly 900 million people have no water at all at their local health facility or have to use unprotected wells or springs. One in five facilities also lack toilets, impacting about 1.5 billion people, the agencies said.

One of the development goals agreed by world leaders in 2015 was for all to have access to safe water and sanitation by 2030.

“Sick people shed a lot more pathogens in their faeces, and without toilets, staff, patients – this includes mothers and babies – are at a much greater risk of diseases caused and spread through human waste.”

The agencies said good water and sanitation services were crucial to reducing the spread of antimicrobial resistance, one of the greatest global health threats.

International charity WaterAid said rising rates of superbugs had been linked to poor sanitary conditions in health facilities which lead to the overuse and misuse of antibiotics.

“The battle to save lives, and to slow the rise of deadly superbugs which threaten us all, cannot be won as long as these dedicated frontline staff are denied ... the fundamentals of health care,” she said.

She urged governments to prioritize the issue when they meet at next month’s World Health Assembly in Geneva.


The data showed that West Africa had some of the lowest rates of access to water and sanitation.

WaterAid said this was alarming given that a lack of clean water and good hygiene had contributed to the spread of the world’s worst Ebola outbreak in the region, which killed more than 11,300 people between 2013 and 2016.