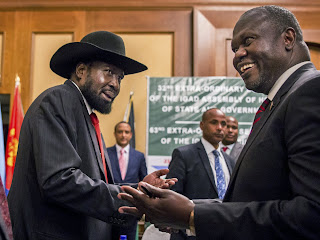 VATICAN CITY (AP) — South Sudan’s president and opposition leader are expected to travel to the Vatican next week for what the Holy See says is a “spiritual retreat” and opposition officials say is an effort to help implement the country’s peace deal.

Vatican spokesman Alessandro Gisotti confirmed the visit Wednesday. He said a spiritual retreat was scheduled next week at the Vatican for “the leaders of South Sudan.” He didn’t identify them or cite any political initiative.

The meeting comes a month after President Salva Kiir met with Pope Francis to discuss the peace process.

A deputy spokesman to opposition leader Riek Machar said Machar and two leaders from the South Sudan Opposition Alliance would attend the meeting with Kiir, and said an audience with the pope is also planned.

The spokesman, Manawa Peter, said the April 10 meeting would focus on confidence-building and helping bring the two leaders together.

South Sudan is emerging from a five-year conflict that killed almost 400,000 people and displaced millions. A peace deal calls for the formerly warring sides to create a single functional government by May.

That’s when Machar is expected to return to South Sudan to once again become the president’s deputy — an arrangement that has collapsed in fighting in the past.

Machar’s participation in the Vatican meeting had been in doubt because he has been under house arrest for two years, most of it in South Africa. But Peter, the deputy spokesman, said he would be allowed to travel to Rome, and is expected to be released from house arrest altogether by the end of the month.

Peter said the Vatican initiative aimed to address the lack of trust that had foiled past peace efforts.

“If we want to bring the people of South Sudan together and mend the peace agreement, they need to have a good relationship and they need to build trust before we form the government,” he told The Associated Press. “We’re happy he’ll be able to go and meet with other political leaders from South Sudan. It will be good for all of them.”

Francis had hoped to visit South Sudan in 2017 along with the archbishop of Canterbury, but security conditions forced it to be called off. During his March 16 meeting with Kiir, Francis renewed his hope to visit, the Vatican said at the time.