Pope Blames Europe, US Weapons For Children Killed In Wars 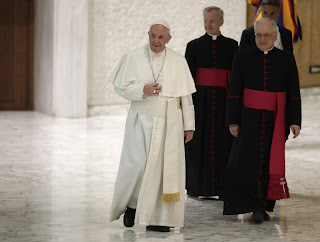 Pope Francis arrives in the Paul VI hall at the Vatican for a audience with students and teachers of the San Carlo Institute of Milan, Saturday, April 6, 2019. (AP Photo/Alessandra Tarantino)

Speaking to students and teachers of Milan’s San Carlo Institute, Francis said the reason there are so many wars around the world is “the rich Europe and America sell weapons ... used to kill children and kill people.”

Without such firepower, the pope added, there wouldn’t have been war in countries such as Afghanistan, Yemen and Syria. .

“A country that produces and sells weapons has on its conscience the death of every child and the destruction of each family,” Francis said.

Talking about the need for countries to welcome and integrate migrants, the pope refuted the crime concerns governments cite to keep out asylum-seekers.

Foreigners aren’t the source of most crime in Italy because “we also have lots of them,” Francis said.

“The Mafia has not been invented by Nigerians. Mafia is ours,” he said. “All of us have the possibility of being criminal. Migrants bring us wealth because Europe has been made by migrants.”
Associated Press News Desk Pope Francis Rome