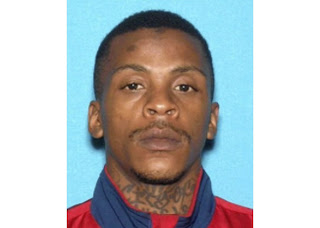 Eric Holder, 29, had been on the run for two days before he was captured in Bellflower, a Los Angeles-area city about 20 miles southeast of where Hussle was gunned down two days earlier.

Hussle and Holder knew each other, and the two had some kind of personal dispute in the hours before the rapper was killed outside his Los Angeles clothing store, Police Chief Michel Moore said.

Police released Holder’s name and photo Monday night and asked for public’s help in finding him.

It was not immediately clear how authorities located the suspect. He was detained first by sheriff’s deputies until LA police arrived and confirmed that he was wanted in Hussle’s slaying, authorities said.

The two men had several arguments on Sunday, and Holder returned to the store with a handgun and opened fire on Hussle and two other men, who survived the shooting, police said.

The chief did not reveal how the two men were acquainted or offer any details about their dispute.

While both Hussle and Holder have ties to street gangs, the dispute between them was personal and did not involve gang activity, Moore said.

After shooting Hussle and two other men who survived, Holder fled in a waiting car driven by a woman, the police chief said.

At least one of the critically injured persons was struck by a car, and the other one had a “penetrating injury,” although it was unclear whether that person was stabbed or cut by broken glass on the ground, a fire department spokeswoman said.

Two other injuries were serious and 15 were considered non-life threatening.

“It’s been a tough few days for Los Angeles,” Garcetti said. “Nipsey Hussle was an artist who touched our city and lives.”

An autopsy completed Monday showed that Hussle was shot in the head and torso. The 33-year-old rapper, whose real name was Ermias Asghedom, had recently purchased the strip mall where the shop is located and planned to redevelop it into a mixed-use commercial and residential complex.

The plan was part of Hussle’s broader ambitions to remake the neighborhood where he grew up and attempt to break the cycle of gang life that lured him in when he was younger.

The rapper sold demos for just a few dollars in those streets before becoming an underground phenomenon for a decade with his much-sought-after mixtapes. Last year he had a mainstream breakthrough with his album “Victory Lap,” a major label debut that got him a Grammy nomination.