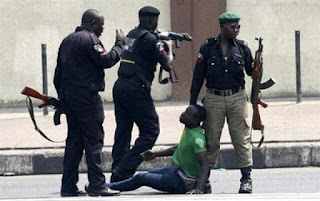 This was even as she noted the conduct of policemen, who she alleged constituted themselves into a terror group.

The NHRC boss stated this during the Public Tribunal on Police Corruption, Brutally and Abuse in Southern Nigeria in Owerri, capitalof Imo State, yesterday.

She said: “Police corruption, abuse and brutality have become more pervasive in the South East.

“There is high level of impunity and extortion, with illegal checkpoints at every one pole and those who refuse to give in to the extortion by these armed policemen would be severely manhandled.

“Some unfortunate ones have ended up being killed and, thereafter, framed as armed robbers.”

Nwokocha maintained that the anti-kidnapping, anti-cultism and the Special Anti-Robbery Squad (SARS) have all become agents of terror.

“In most cases, the police will lie that the culprit has been dismissed, when, in fact, they have been transferred.

“Today, SARS is now used as debt collectors, for settlement of land and even family disputes, which are simply civil matters.”

Also, National Coordinator of #EndSARS, Segun Awosanya, said SARS officers have constituted themselves into an organised crime syndicate, who are above the law.

“Our police system has been operating under the oppressive Act of 1943 and, until that Act is repealed and replaced with a more progressive one that is in tandem with the administration of criminal justice.

“Today, what we have as police officers are people who constitute themselves into an organised crime syndicate that are above the law and that is why we are calling for the scrapping of SARS or its total overhauling.

“We want every police officer to be subjected to psychological evaluation because, you don’t give a gun to a man that is mentally unbalanced,” Awosanya noted.

NOPRIN National Coordinator, Okechukwu Nwanguma, said the organisation had been at the forefront of police reforms and that the tribunal was purposely organised for the people of the South East, who are victims of police brutality and abuse.

He said south easterners should come forward with their experiences, which would form part of their recommendations for action.
Corruption Daily Sun Imo State News Desk Owerri
Reactions: