‘Notre Drame’: Newspapers Around The World React To One Of France’s Darkest Days 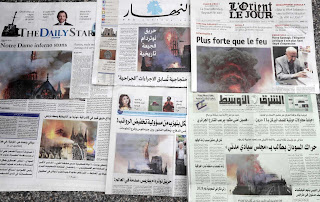 Lebanese newspapers, featuring images of the fire that ravaged Paris's Notre Dame Cathedral on their front pages, are spread out at a newspaper stall in Beirut on April 16, 2019. (Photo by ANWAR AMRO / AFP/Getty Images)

LONDON (WASHINGTON POST) — As the sun rose above the charred remains of France’s beloved Notre Dame Cathedral on Tuesday morning, front pages around the world reported the blaze that destroyed centuries of history and brought down one of the world’s most iconic spires.

While France mourned and President Emmanuel Macron vowed to rebuild all that was lost to the flames, newspapers told the story of the inferno through an array of striking images and headlines.

From France to Britain, Nigeria to Lebanon, here is a look at how the story of one of France’s darkest days was told in print.

“Notre-Dame des Larmes” (Our Lady of Tears) read the front page of Le Parisien. “Notre Drame” (Our Drama) said the headline on the front of the French newspaper Libération, alongside a photo of the moment the cathedral’s spire collapsed.

The British tabloid, the Sun, led with the headline “Notre Doom,” a pun that some observers on social media deemed “disgraceful” and “offensive” in the face of such a tragedy.

Other British newspapers reflected on the historical blow to Paris and the rest of the world. “Paris weeps for its beloved lady” wrote the Daily Telegraph, using a powerful image from the blaze before firefighters were eventually able to extinguish the flames.

Also using an image of the precise moment the spire toppled, the front of the Irish Times read: “Notre Dame, symbol of Paris, destroyed.” 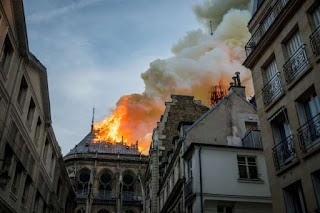 Smoke and flames rise during a fire at Notre Dame Cathedral in Paris, on April 15.

While the scale of the damage remains unclear, donations to assist in efforts to rebuild poured in overnight.

“Inferno devastates Notre-Dame,” read the front page of the Guardian, along with a detail on how the fire may have started. “Blaze may be linked to building work, say police.”

“Just before the resurrection . . . a civilization goes up in flames!” the Guardian Nigeria reported on its front page.
Associated Press France Paris Society Washington Post