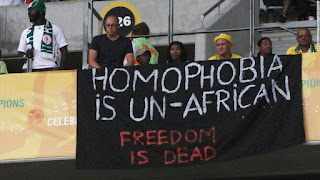 Banners held up in protest after Nigeria passed its controversial Same Sex Marriage Prohibition act in 2014, which threatens LGBTQ+ Nigerians with 14 years in prison. Image via CNN

Editor's Note: Richard Akuson is a Nigerian lawyer and founder of A Nasty Boy magazine which seeks to challenge conventional norms about gender and masculinity. Akuson is now based in New York. The views expressed here are solely his.

(CNN) -- In 2017, I started A Nasty Boy magazine to validate and affirm the lives and experiences of gay men in Nigeria. I hoped that it could contribute, in some way, to broader tolerance for the LGBTQ+ community across the country.

I wanted to start meaningful conversations around gender norms and masculinity that speak specifically to our realities as gay men within a culture that is poisonously patriarchal and deeply homophobic.

Against a backdrop of deadly anti-gay violence, A Nasty Boy dared to be a haven for gay men in Nigeria and, in no time, received international attention through CNN, BBC, The Guardian, The Economist, Vogue, and others.

But neither the acclaim nor my considerable privilege, as an attorney and son of a politician, could protect me from the four men who brutally ambushed me in my hometown, Akwanga, Nassarawa State, in central Nigeria late last year.

They accused me of being gay and "spreading a gay agenda," as they pummeled me; each punch was an assault on who I was. They took my phone, forced me to unlock it, and found further proof of my homosexuality. They poked my anus with sticks in mock penetration.

The crippling, gut-wrenching pain that followed every punch and every poke felt like my skin was being nailed to a wall. They took pictures of me to memorialize their triumph in my moment of humiliation.

And yet, even this gruesome attack pales in comparison to the fatal brutality many Nigerian gay men have too often experienced in the form of lynchings or pillory with tires before they're set on fire and burnt alive—not for terrorism or worse, but for being gay, for being human, in a desperately homophobic country.

In Nigeria, gay men are portrayed as cancers eating deeply into the fabric of society—tumors that must be obliterated. The federal Same-Sex Marriage (Prohibition) Act of 2014 says anyone found guilty of homosexuality faces up to 14 years in prison.

Shari'a law, which is practiced in 12 northern states in the country imposes a penalty of death by stoning. Through these draconian laws, arbitrary arrests and extortion by the police, the Nigerian government sanctions violence against its LGBTQ+ citizens.

A 2013 PewGlobal research suggests 98% of Nigerians believe homosexuality should not be accepted by society. A 2017 survey by The Initiative for Equal Rights (TIERS), a Nigerian-based human rights organization, showed 90% of Nigerians support the continued enforcement of Nigeria's anti-gay laws.

Homophobia is the tie that binds a divided country; the one thing a nation of chronic ethnic loyalties, of religious tension, of failed government, can agree upon. Growing up in Nigeria, I witnessed first-hand a deeply ingrained culture of insidious hyper-masculinity and virulent homophobia.
Newsroom Nigeria Society