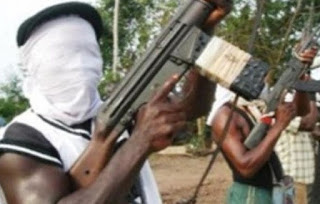 AWKA, ANAMBRA (INDEPENDENT) -- The bullet-riddled body of Chief Frank Igboka, former Chief Whip of the state House of Assembly, was all policemen of the Anambra State Command, met by the time they responded to the shattering sound of gunfire ripping through the stillness of the night at Nimo, a village a few minutes drive to Awka, capital of Anambra State on Tuesday.

Igboka a renowned athlete and the President General of Nimo community in Njikoka Local Government Area, was reportedly eventually felled at about 8:18 p.m. after series of attempts on his life by suspected assassins.

The former lawmaker, who is reported to have about 30 medals in his kitty for his athletic prowess, was said to have been killed by unknown gunmen while driving to his house, located a short distance to the scene of the crime.

News Express, quotes resident of the area, Ijeoma Okonkwo, who as saying that the sporadic gun shots which sent people running to their homes for safety lasted for about 20 minutes.

She said: “I was sitting outside of our home at about after 8pm discussing politics with my parents and brother when suddenly we started hearing loud gun shots. We all ran into the house until the sound of the gunshots stopped.

“I joined my brother to run outside shortly after the gunshot sound stopped. When we got to the scene, some people had already gathered there and on close look, I discovered the man shot was Nimo PG. The people shot him severally.

“It is sad. This is the man that chased bad boys away from Nimo and we have been enjoying peace.”

A statement by the state Police Public Relations Officer (PPRO), SP Haruna Mohammed, said that the deceased was shot at close range by four armed men.

He said the suspects after killing the deceased, escaped towards Abacha/Eziowelle road in a pick-up van.

The statement reads in part: “At about 8:18pm on Tuesday, there was a sporadic gunshots around Nimo market in Njikoka LGA of Anambra State.

“Police patrol team attached to Nimo Division rushed to the scene and discovered Chief Frank Anthony Igboka on the driver’s seat of his Chevrolet SUV vehicle lying unconscious in the pool of his own blood and his body was riddled with bullet wounds.
Awka Igbo Newsroom Nigerian Dailies Society