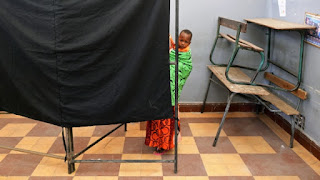 A woman carries a child as she casts her vote during presidential election, at a polling station in Medina neighborhood, in Dakar, Senegal, on February 24, 2019. Sylvain Cherkaoui/Reuters via Council on Foreign Relations

In Africa and among Africa’s foreign friends, elections are the lodestone of democratic progress. Hence the intense focus on the mechanics of elections, rather than other aspects of democracy, such as the extent to which an African voter is actually independent rather than subject to myriad forms of coercion by “big men” or others. Afrobarometer, Africa’s widely-respected polling organization, found [PDF] that 68 percent of Africans doubt the secrecy of their ballot. In other words, a majority of Africans are skeptical about what they think is a key element in elections. As Afrobarometer points out, that skepticism is surprisingly high in relatively established democracies, such as Senegal (89 percent), Kenya (80 percent), and South Africa (68 percent).

These poll results seem to reflect accurately the reality, at least as relayed by anecdotes. All over Africa, there are numerous ways for those who wish to do so to find out how an individual or a community voted. The big exception is South Africa, where the quality of elections is high and where voter secrecy is generally maintained. The Afrobarometer data on South Africa likely reflects general feelings of marginalization in the townships and in rural areas rather than a specific election experience.

The distinguished South African newspaper, Mail and Guardian, puts these poll results in the right context: Africans believe that “the space for civil and political rights in Africa is shrinking.” The newspaper notes that other polling data shows that 67 percent of polled Africans, a 7 percent decline from the 2012/13 survey, think they are “somewhat” or “completely” free to say what they think. Such polling is a cautionary note to the international optimism about developments in Algeria and Sudan, which may be premature, given the negative examples of Egypt and Zimbabwe.
Africa Essay John Campbell News Desk