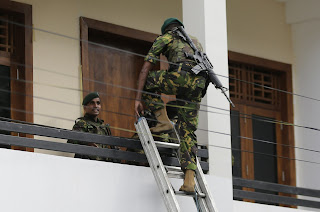 A Sri Lankan police commando enters a house suspected to be a hideout of militants following a shoot out in Colombo, Sri Lanka, Sunday, April 21, 2019. More than hundred were killed and hundreds more hospitalized with injuries from eight blasts that rocked churches and hotels in and just outside of Sri Lanka's capital on Easter Sunday, officials said, the worst violence to hit the South Asian country since its civil war ended a decade ago. (AP Photo/Eranga Jayawardena)

A look at a long and troubled history marked by ethnic and religious divides:

Sri Lanka, an island nation of some 23 million people, was dominated for decades by the sharp divide between the majority Sinhalese, who are overwhelmingly Buddhist, and the minority Tamil, who are Hindu, Muslim and Christian. The mistreatment of Tamils helped nurture the growth of armed separatists and led to nearly 30 years of civil war, with Tamil Tiger fighters eventually creating a de facto independent homeland in the country’s north. The Tigers were crushed in a 2009 government offensive, with some observers believing that tens of thousands of Tamils died in the last few months of fighting alone.

There is no history of violent Muslim militants in Sri Lanka. However, after the civil war ended, a religious divide quickly took hold, with hard-line Buddhist monks rallying Sri Lankans against what they argue is a pernicious threat: Muslims, who make up roughly 10 percent of the country’s population. Buddhist nationalist leaders and false social media reports accuse Muslims of recruiting children, trying to grow their ranks by marrying Buddhist women and attacking Buddhist shrines. Small-town economics also plays a significant role, since Muslims own many of the country’s small shops. As for the country’s small Christian minority: While there have been scattered incidents of anti-Christian harassment in recent years, there has been nothing on the scale of what happened Sunday.

In 2018, anti-Muslim violence flared across the hills of central Sri Lanka, fed by rumors spread over social media about attacks on Buddhists. Mobs of Buddhists swept through small towns, attacking mosques and Muslim-owned shops. The government briefly declared a state of emergency and ordered popular social media networks, including Facebook, Viber and WhatsApp, blocked for a time to stop the violence from spreading.
Asia Newsroom Sri Lanka The Associated Press