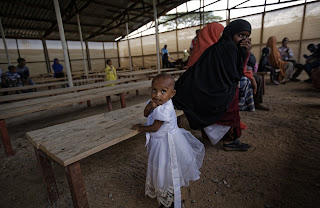 In this Tuesday, Dec. 19, 2017 file photo, some of around 20 Somali refugee families wait to be flown to Kismayo in Somalia, under a voluntary repatriation programme, at the airstrip of Dadaab refugee camp, hosting over 230,000 inhabitants, in northern Kenya. An internal United Nations document obtained by The Associated Press on Friday, March 29, 2019 says Kenya again seeks to close the Dadaab camp that hosts more than 200,000 refugees from neighboring Somalia. (AP Photo/Ben Curtis, File)

NAIROBI, KENYA(AP) — An internal United Nations document says Kenya again seeks to close the Dadaab camp that hosts more than 200,000 refugees from neighboring Somalia and is one of the largest such camps in the world.

The U.N. refugee agency document obtained by The Associated Press says it “appreciates” Kenya’s suggestion, made on Feb. 12, to close the camp within six months. But it notes that security remains “precarious” in Somalia, where the al-Qaida-linked al-Shabab extremist group is based, and says returns must be voluntary.

Kenya calls the refugee camp near the Somalia border a source of insecurity. Some officials have argued that it has been used as a recruiting ground for al-Shabab and a base for launching attacks inside Kenya, but the officials have not provided conclusive proof.

A Kenyan court in 2017 blocked the closure of Dadaab, however, saying it was not safe for refugees to return home.

A senior government official, speaking on condition of anonymity because he was not authorized to discuss the issue, confirmed Kenya’s latest plan to close the camp.

The decision followed the deadly al-Shabab attack on a luxury hotel complex in Kenya’s capital, Nairobi, in January, he said.

The senior official said plans for the Nairobi attack were made at the Dadaab camp. In the government’s previous attempt to close the camp, it said plans for the 2013 attack on the Westgate mall in Nairobi that left 67 people dead had been made in Dadaab, but it offered no proof.

The first settlement in Dadaab was established in 1991, when refugees fleeing conflict in Somalia started to cross the border into Kenya, according to the U.N. refugee agency.

The document says that more than 82,000 refugees had been assisted to return to Somalia under voluntary repatriation as of the end of 2018.