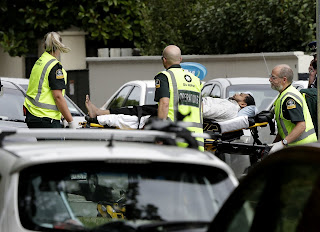 Ambulance staff take a man from outside a mosque in central Christchurch, New Zealand, Friday, March 15, 2019. A witness says many people have been killed in a mass shooting at a mosque in the New Zealand city of Christchurch.(AP Photo/Mark Baker)

THE ASSOCIATED PRESS
CHRISTCHURCH, NEW ZEALAND(AP) — The Latest on shootings at mosques in New Zealand (all times local):

New Zealand Police Commissioner Mike Bush said anyone thinking of going to a mosque should stay put and close their doors.

Prime Minister Jacinda Ardern said at a Friday afternoon news conference that one suspect was in custody but “there could be others involved.”

A man who lives near the Masjid Al Noor mosque in central Christchurch said many people were dead there. A witness to a second shooting told New Zealand media he saw two wounded people being transported by rescuers afterward.

Police said there were multiple fatalities and one person was in custody, but no details were immediately available.

Ardern said at a Friday afternoon news conference, “what has happened here is an extraordinary and unprecedented act of violence.”

She said while many people affected may be migrants or refugees “they have chosen to make New Zealand their home and it is their home. They are us. The person who has perpetuated this violence against us is not.”

New Zealand media say a shooting has occurred in a second mosque in the city of Christchurch.

No details were immediately available.

Earlier Friday afternoon, police had urged people to stay indoors as authorities responded to a shooting at the Masjid Al Noor mosque.

A neighbor described mass casualties inside the mosque and said he saw the gunman flee.

A witness says many people have been killed in a mass shooting at a mosque in the New Zealand city of Christchurch.

Police have not described the scale of the Friday shooting but urged people in central Christchurch to stay indoors.

Witness Len Peneha says he saw a man dressed in black enter the Masjid Al Noor mosque and then heard dozens of shots, followed by people running from the mosque in terror.