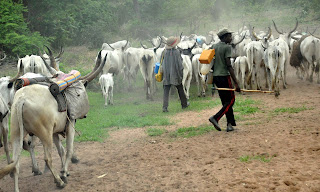 The incident occurred on Wednesday near Olo town in Ezeagu Local Government.

The deceased, identified as Nnamdi Ogueche, was said to have gone for a peace talk between the communities and the herdsmen who have been terrorising parts of Uzo-Uwani Local Government.

It was gathered that the council secretary was in company of three others in a vehicle and were returning from the peace meeting when the suspected herdsmen attacked their vehicle.

There was a stampede. The occupants of the vehicle jumped out and ran.

The assailants were, however, said to have pursued the council secretary and shot him dead.

The fate of others was unknown last night.

Contacted for comments, the Chairman of Uzo-Uwani Local Government, Mr. Fidelis Ani, confirmed the killing of the council secretary.

Police Commissioner Sulaiman Balarabe, who confirmed the incident at a news briefing yesterday, said the deceased was ambushed.

He said three suspects have been arrested.
Enugu News Desk Nigeria The Nation