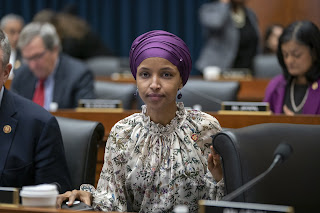 Rep. Ilhan Omar, D-Minn., sits with fellow Democrats on the House Education and Labor Committee during a bill markup, on Capitol Hill in Washington, Wednesday, March 6, 2019. Omar stirred controversy last week saying that Israel's supporters are pushing U.S. lawmakers to take a pledge of "allegiance to a foreign country." Omar is not apologizing for that remark, and progressives are supporting her. (AP Photo/J. Scott Applewhite)

WASHINGTON (AP) — Speaker Nancy Pelosi said Thursday the House will vote on a resolution condemning anti-Semitism, Islamophobia and other forms of hate after an upheaval that split Democrats and clouded their agenda. But Pelosi said the measure won’t name Ilhan Omar, the freshman Democrat whose comments about Israel sparked the uproar.

Pelosi defended Omar and says she does not believe the new congresswoman understood the “weight of her words” or that they would be perceived by some as anti-Semitic.

“It’s not about her. It’s about these forms of hatred,” Pelosi told reporters.

The move was in part intended to resolve a divide that opened after Omar, D-Minn., said that Israel’s supporters were pushing lawmakers to take a pledge of “allegiance” to a foreign country. A Muslim-American, she has been critical of the Jewish state in the past and apologized for those previous comments.

But she has not apologized for what many in Congress saw as a suggestion that Israel’s supporters have split loyalties. And that sparked a demand from some quarters to put a resolution on the floor condemning anti-Semitism.

Other members who wanted to broaden it to include a rejection of all forms of racism and bigotry. Some proposed two separate resolutions. Others questioned whether a resolution was necessary, and viewed such a move as unfairly singling out Omar at a time when President Donald Trump and others have made disparaging racial comments.

That seemed to quiet some of the dissention, but there remained frustration that the party that touts its diversity conducted such a messy and public debate about how to declare its opposition to bigotry.

“This shouldn’t be so hard,” said Rep. Ted Deutch, D-Fla., said on the House floor Thursday.

The abrupt turn of events come as Democratic leaders try to quickly fend off a challenge from Republicans on the issue.

Democratic leaders worried they could run into trouble on another bill, their signature ethics and voting reform package, if Republicans tried to tack their own anti-Semitism bill on as an amendment.

By voting Thursday, the House Democratic vote counters believe they could inoculate their lawmakers against such a move by passing Democrats’ own anti-hate bill.