Journalist At Site Critical Of Duterte Arrested In 2nd Case 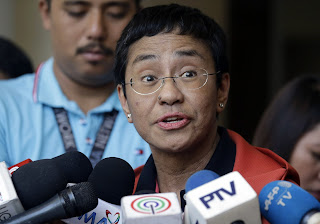 MANILA, PHILIPPINES (AP) — The head of a Philippine online news site, which is among media agencies critical of President Rodrigo Duterte, was arrested Friday in a second case in two months, this time over an alleged investment law violation.

Police served an arrest warrant to Rappler Inc. CEO and executive editor Maria Ressa after she arrived at Manila’s international airport and she later posted bail at a regional trial court.

Ressa’s co-defendants posted bail for the new charge earlier in the week. Ressa was returning from a trip to the U.S. after securing a travel bond allowing her to leave the country while other criminal cases against her are pending.

“Every action takes us farther into a descent into tyranny,” Ressa told reporters outside the court in suburban Pasig city. “This is the weaponization of the law.”

Ressa and some media watchdogs said the latest government move was an attempt to muzzle independent media and other critics of Duterte, particularly over his deadly crackdown against illegal drugs.

The Duterte administration has denied her cases were a press freedom issue, saying she and Rappler have breached Philippine laws and have been charged by authorities and should answer before the judicial system like other violators.

The charges stemmed from a complaint by the National Bureau of Investigation that accused Rappler of violating the law by allowing a foreign investor, U.S.-based Omidyar Network, to inject funds in the online news outfit.

The Philippine constitution bans foreign ownership of news media but Rappler has argued that it did not grant Omidyar the power to control or influence its news operations.

The country’s corporate watchdog, the Securities and Exchange Commission, has revoked the site’s license over what it ruled was a breach of the constitutional ban on foreign ownership and control of Philippine media outlets. Ressa is facing separate complaints for allegedly violating tax laws in connection with the foreign funds that Rappler received.

Omidyar donated its money in Rappler to its key editors and staff, so an appeals court has ordered the SEC to re-examine if that action should warrant a reassessment of the license revocation.

Ressa was arrested last month and freed on bail in a libel complaint filed by a businessman, who accused Rappler of linking him to illegal drugs, human trafficking and murder in a news report without getting his side or any evidence.
Associated Press Journalism Society