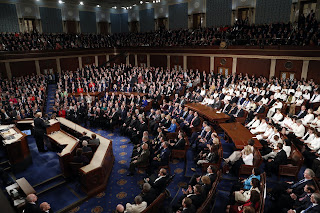 Senate Democratic Leader Chuck Schumer is dismissing as “a real eye-roller” President Donald Trump’s assertion that if anyone else had been elected president the U.S. would be at war with North Korea.

Trump announced Tuesday in his State of the Union address that he will hold a two-day summit with North Korea leader Kim Jong Un (kim jawng oon) this month in Vietnam to continue his efforts to persuade Kim to give up his nuclear weapons. Trump claimed the U.S. “would right now, in my opinion, be in a major war with North Korea” if he wasn’t president.

Schumer told CNN on Wednesday that Trump’s claim wasn’t credible. Schumer said Trump’s foreign policy is “inside-out” with Trump “patting dictators on the back and attacking our allies.”

Trump’s meeting with Kim last June in Singapore produced a joint statement between the two leaders but no concrete plan for denuclearization.

President Donald Trump said Tuesday that he will hold a two-day summit with North Korea leader Kim Jong Un (kim jawng oon) Feb. 27-28 in Vietnam to continue his efforts to persuade Kim to give up his nuclear weapons.

Trump has said his outreach to Kim and their first meeting last June in Singapore opened a path to peace. But there is not yet a concrete plan for how denuclearization could be implemented.

Denuclearizing North Korea is something that has eluded the U.S. for more than two decades, since it was first learned that North Korea was close to acquiring the means for nuclear weapons.

Director of National Intelligence Dan Coats told Congress last week that U.S. intelligence officials do not believe Kim will eliminate his nuclear weapons or the capacity to build more because he believes they are key to the survival of the regime. Satellite video taken since the June summit has indicated North Korea is continuing to produce nuclear materials at its weapons factories.
Associated Press News Desk North Korea Society
Reactions: