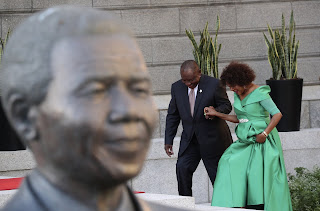 South African President, Cyril Ramaphosa, left, and speaker of the house, Baleka Mbete, right, arrive at parliament, behind a statue of Nelson Mandela, in Cape Town, South Africa, Thursday, Feb. 7, 2019 for the State Of The Nation address. Ramaphosa is set to give his second address to parliament just months before national elections seen by many as a referendum on his ruling African National Congress party. (Mike Hutchings, Pool via AP)

JOHANNESBURG (AP) — South African President Cyril Ramaphosa in his State of the Nation address said Thursday the country had begun to recover from “a period of uncertainty and a loss of confidence and trust” under his scandal-ridden predecessor, and he announced that the presidential election will be on May 8.

The national elections are seen by many as a referendum on his ruling African National Congress party.

Ramaphosa, who came to power a year ago after former President Jacob Zuma was ousted by the ANC, has promised to revive South Africa’s flagging economy and tackle deep-seated corruption.

He said in his speech to parliament that in 2019 his government would focus on five key tasks: speeding up inclusive growth, improving the education system, improving the lives of poor South Africans, stepping up the fight against corruption and strengthening the state.

This year, the 25th year since the end of white minority rule, South Africa should reflect on “whether we have built a society in which all South Africans, equally and without exception, enjoy their inalienable rights to life, liberty and dignity,” he told lawmakers.

After he took office, South Africans experienced a rare wave of optimism, sometimes referred to as “Ramaphoria,” following an era of bruising national politics but many have once again grown weary of the nation’s rampant unemployment, crime and corruption.

The findings of a commission of inquiry into corruption are “deeply disturbing, for they reveal a breadth and depth of criminal wrongdoing that challenges the very foundation of our democratic state,” Ramaphosa said. “Where there is a basis to prosecute, prosecutions must follow swiftly and stolen public funds must be recovered urgently.”

He said a special directorate would be set up within the office of the new National Director of Public Prosecutions to look at the evidence and identify priority cases to investigate and prosecute.

The ruling party also has faced pressure over land reform as one way to right deep inequities that still exist a quarter-century after the end of apartheid.

Ramaphosa in his speech said his government supported the constitutional review process now underway to “unambiguously set out provisions for expropriation of land without compensation” in order to quicken the pace of reform.

He said the state has already identified state-owned land that will be released to create housing in urban and semi-urban areas.

The disillusionment among many South Africans with the ANC may be a crucial factor in the elections in May.

“We need to recognize that things are getting progressively worse for us, and we have to acknowledge that the reason they’re getting worse is the ANC,” Mmusi Maimane, leader of the Democratic Alliance, the main opposition party, said in his “alternate” State of the Nation address.

The left-wing Economic Freedom Fighters, a small but influential opposition party that has disrupted the speech in past years, threatened to interrupt the address again unless Ramaphosa addressed a political donation he received from a company embroiled in a corruption scandal.