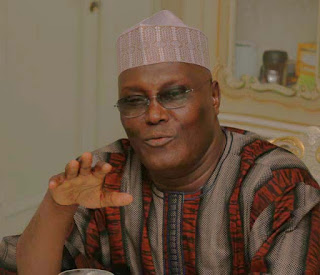 Atiku Abubakar image via The Nation

YOLA (THE NATION) -- The presidential candidate of the Peoples Democratic Party (PDP), Alhaji Atiku Abubakar, voted in his Ajiya Ward polling unit in Jimeta, Yola, yesterday with a pledge to accept the result of the presidential election even if he loses, provided the poll is credibly conducted.

Atiku said as a democrat he has no problem with accepting poll results. “I am a true democrat unlike others. So far so good,” he said.

The former Vice President who had a brief chat with the media after casting his vote at the Unit 012 in Ajiya Ward near one of his houses at Old GRA, Jimeta, reiterated that although he was sure he would win, he would accept defeat if the conduct of the poll turned out to be transparently free and fair.

He expressed satisfaction with the turnout of voters to exercise their franchise during the polls, and said he hoped all those officiating the conduct of the election would do their jobs in all honesty.

“I am impressed with the turnout of the voters. I hope the electoral officers would be able to cope with the crowd,” Atiku said. Earlier, Alhaji Auwal Tukur, a former governorship candidate of the Peoples Democratic Party (PDP), also said he was satisfied with the turnout of the electorate to vote, saying that the last postponement appears not to have had impact on voter turnout this time.
Electoral Mess News Desk Nigeria The Nation