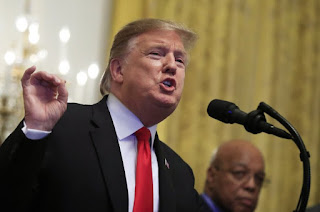 WASHINGTON (AP) — House Democrats on Friday introduced a resolution to block the national emergency declaration that President Donald Trump issued to fund his long-sought wall along the U.S-Mexico border.

The move sets up a fight that could result in Trump’s first veto. It starts the clock on a constitutional clash between Trump and Democrats and sets up a vote by the full House as soon as next week.

The Democratic-controlled House is sure to pass the measure, and the GOP-run Senate may adopt it as well despite Trump’s opposition.

Any Trump veto would likely be sustained, but the upcoming battle will test Republican support for Trump’s move, which even some of his allies view as a stretch — and a slap at lawmakers’ control over the power of the federal purse.

A staff aide introduced the measure during a short pro forma session of the House in which Rep. Don Beyer, D-Va., presided over an almost empty chamber.

House Speaker Nancy Pelosi, D-Calif., has promised that her chamber will “move swiftly” to pass the measure, predicting in a letter to colleagues that “the resolution will be referred to the Senate and then sent to the President’s desk.”

Should the House and the Senate initially approve the measure, Congress seems unlikely to muster the two-thirds majorities in each chamber that would be needed later to override a certain Trump veto.

The measure to block Trump’s edict will be closely watched in the Senate, where moderates such as Susan Collins, R-Maine, and Lamar Alexander, R-Tenn., have signaled they would back it. Majority Leader Mitch McConnell, R-Ky., is only a reluctant supporter of Trump on the topic.

The battle is over an emergency declaration Trump has issued to access billions of dollars beyond what Congress has authorized to start erecting border barriers. Building the wall was the most visible trademark of Trump’s presidential campaign.

Besides signing the bill, Trump also declared a national emergency and used other authorities that he says give him access to an additional $6.6 billion for wall building. That money would be transferred from a federal asset forfeiture fund, Defense Department anti-drug efforts and a military construction fund. Federal officials have yet to identify which projects would be affected.

Rep. Joaquin Castro, D-Texas, is the resolution’s sponsor and has already garnered support from a majority of the Democratic-controlled House as co-sponsors.

Pelosi wrote that the Republican president’s “decision to go outside the bounds of the law to try to get what he failed to achieve in the constitutional legislative process violates the Constitution and must be terminated.”
AP News Democracy News Desk
Reactions: