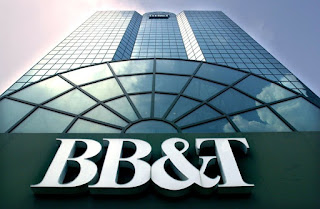 This Aug. 22, 2003 file photo shows the corporate headquarters of BB&T in Winston-Salem, N.C. Southern regional banks BB&T and SunTrust are combining in an all-stock deal valued at about $66 billion. The banks said Thursday, Feb. 7, 2019 that the combined company will be the sixth-largest U.S. bank based on assets and deposits. It will have approximately $442 billion in assets, $301 billion in loans and $324 billion in deposits serving more than 10 million households (David Rolfe/The Winston-Salem Journal via AP)

NEW YORK (AP) — Two Southern banks giants — BB&T and SunTrust — announced they would merge in a $66 billion deal, the first big bank merger since the chaos of the 2008 financial crisis.

The combined company will create the sixth-largest bank in the country, putting BB&T and SunTrust in the ranks of other megabanks like JPMorgan Chase, Bank of America and Wells Fargo.

The banks said Thursday that the combined company will be have $442 billion in assets, $301 billion in loans and $324 billion in deposits serving more than 10 million households. The two banks’ market share will make them a formidable presence in the South, particularly in growing parts of the country like Atlanta and Nashville, Tennessee. The companies operate banks from Pennsylvania to Florida, and as far west as Texas.

Big bank mergers had been nonexistent after the financial crisis, when a flurry of government-directed mergers created the megabanks known today. Wells Fargo merged with Wachovia, JPMorgan acquired Bear Stearns and Washington Mutual and Bank of America purchased Merrill Lynch. Most bank mergers stopped after the crisis because the banks had to clean up their balance sheets, and the regulatory environment made mergers more difficult.

Since that time, the gap between the size of the big Wall Street banks and the regional banks like BB&T, SunTrust, PNC Bank, Fifth-Third and others has only widened.

The Trump administration is taking a much softer stance on bank regulations, and has appointed dozens of new business-friendly policymakers into critical positions at the nation’s bank regulators. Further, Congress passed a law last year to ease some of the rules put into place under the Dodd-Frank Act after the financial crisis.

“The regulatory environment is much easier for something of this size to happen,” said Brian Klock, an analyst with KBW.

The combined company will keep a presence in Winston-Salem, North Carolina, where BB&T is based. It will keep a wholesale banking center in Atlanta, where SunTrust has its headquarters.


BB&T and SunTrust have about 740 branches within two miles of each other, or about 24 percent of all branch locations run by the banks. BB&T Chairman and CEO Kelly King said during a conference call that the companies will be “careful and methodical” about which branches they close.

“It’s an extraordinarily attractive financial proposition that provides the scale needed to compete and win in the rapidly evolving world of financial services,” King said in a prepared statement.