World Shares Fall On Doubts US Shutdown Deal Will Succeed 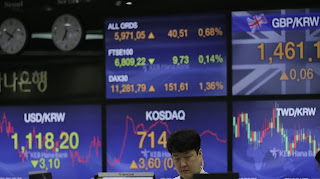 BANGKOK (AP) — Shares fell in Europe early Monday after Asian markets retreated from early gains on caution over China-U.S. trade talks and over the ability of congressional negotiators to forge a government funding bill acceptable to President Donald Trump.

TRADE TALKS LOOM: Talks aimed at resolving the impasse over Chinese technology ambitions and other issues are due to resume in Washington later in the week, led by the U.S. Trade Representative Robert Lighthizer and Chinese Vice Premier Liu He. Analysts say there might be moves to trim China’s massive trade surplus with the U.S. that could stave off further hikes in punitive tariffs imposed by both sides. However, they expect gaps to remain on key problems such as China’s blueprint for state-led development of leading technologies.

U.S. GOVERNMENT RE-OPENS: There was muted reaction in U.S. markets on Friday to news that Trump and congressional leaders had reached a deal to reopen the federal government for three weeks while talks continue over the president’s demands for money to build a wall along the U.S. border with Mexico. Doubts that they can reach agreement deepened after Trump told the Wall Street Journal in an interview that chances the congressional negotiators can craft a deal he’d accept were “less than 50-50.”

ANALYSTS’ VIEWPOINT: “So the US government being ‘open’ again is a relief. But the greater challenge ahead is to prevent another shut-down come 15th Feb. and to that end, headway in talks between Republicans and Democrats over the next three weeks is critical,” Mizuho Bank said in a commentary.

JAPAN-ECONOMY: Shares fell in Tokyo as the parliament convened and Prime Minister Shinzo Abe laid out plans to cope with adverse factors such as a sales tax hike due in October and longer-term demographic trends. Finance Minister Taro Aso pledged to use “every policy tool at our disposal” as he sought support for a budget that includes 2 trillion yen ($18 billion) in stimulus to counter an Oct. 1 increase in the sales tax to 10 percent from the current 8 percent.