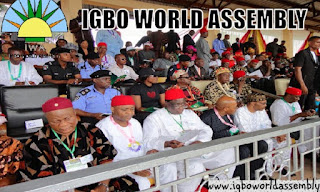 Igbo World Assembly via Council of Igbo States in America

The Igbo World Assembly, IWA, yesterday said it endorsed the candidature of the Peoples Democratic Party, PDP, presidential candidate, Alhaji Atiku Abubakar and his running mate, Mr Peter Obi, because it believed that the duo have the commitment to lead a government with firm knowledge and competent management of Nigeria’s economy, while ensuring detribalised appointments and leadership in all sectors of the government.

IWA is the umbrella body of Igbo organisations worldwide in over 35 countries and the representatives of Ohanaeze Ndigbo in Diaspora.

The group while setting political agenda for Atiku in a world press conference at the weekend jointly addressed by Dr. Nwachukwu Anakwenze, chairman IWA, Christian Onuorah, vice chairman and Oliver Nwankwor, secretary general strongly endorsed the candidates of the Peoples Democratic Party, PDP, led by Atiku Abubakar/Peter Obi because of their commitment to the core beliefs and principles including respect for Nigeria constitution and rule of law, respect for human rights and civil rights, respect for the Federal Character Commission rules, implementation of restructuring, regionalization, and devolution of powers and merit-based appointment to government positions.

According to IWA which has been preaching a better political structure in the country, an Atiku-led PDP, if elected, could provide full security for all Nigerians.

“We have endorsed Atiku/Obi Presidential bid because they have the commitment to lead a government with firm knowledge and competent management of Nigeria’s economy, detribalised appointments and leadership in all sectors of the government, equal and equitable treatment of all Nigerians regardless of tribes or religion, elimination of ethnic cleansing and kidnappings in the Nigerian political space, belief in free and fair electoral process and not on rigging of elections”, the group noted ahead of the general elections next month.

With optimism, the diaspora group equally endorsed Atiku’s Presidential bid with the belief that he will unite all Nigerians and not one that is divisive. “We need a government that fights corruption and not political opponents.

We do not need a government that borrows more money than any in the history of Nigeria with nothing good to show for it. Nigeria does not need a government that carries out fragrant violation of the principles of separation of powers. That is why we are endorsing Atiku. We have no doubt that Atiku will rebuild Nigeria. “We express delight over the political dynamics prevailing in Nigeria at this time, and hereby endorses the candidacy of the Presidential Candidate and the Vice-Presidential candidate of the PDP led by Atiku Abubakar/Peter Obi. “The Igbo extraction, Nigeria, and the entire African continent want a true, sustainable democracy and freedom and will continue to work tirelessly toward achieving this noble goal.

“Our history in Nigeria clearly shows that Ndiigbo have always stood for democracy and equality for all. We do not believe or promote religious based politics and ideology.

We envisioned a Nigeria where leadership is based on meritocracy and where fairness reigns with a sense of direction and accountability to the various groups and for the common good of the country, the group said, adding that they envisioned a Nigeria where people can vote and be voted for in the entire country.
Igbo Igbo Diaspora Society Vanguard