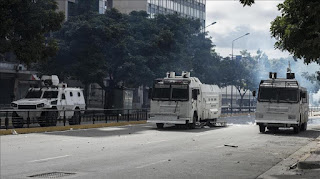 According to Spanish national news agency EFE, a Colombian photojournalist of the agency, who went to cover the events across the country, disappeared on Wednesday morning in Caracas.

The agency said he had been arrested by Venezuelan authorities along with his two colleagues -- one Spanish and one Colombian.

Gonzalo Dominguez Loeda from Spain and Colombian Mauren Barriga Vargas were also arrested at the EFE office by the Bolivarian Intelligence Service, SEBIN, while Leonardo Munoz was arrested by the Directorate of Military Counterintelligence, the news report added.

Commenting on the incident, Colombian Foreign Minister Carlos Holmes Trujillo said his country "rejects the arbitrary detention of two journalists and a photojournalist of EFE Agency."

"We demand immediate release and respect for their lives," Trujillo said in a tweet.

Venezuelan Foreign Minister Jorge Arreaza defended his country's authorities, saying some journalists entered the country without work permits and some tried entering the presidential palace without any accreditation.

"As in any other country in the world, journalists can't assign themselves an accreditation," Arreaza said on Twitter.

"International media and agencies know that in order to avoid unnecessary inconveniences, they must complete the necessary procedures at the consulates prior to their trip to the country," he added.

Venezuela's National Union of Workers of the Press (SNTP) announced that two French journalists were also arrested Wednesday near the Presidential Palace Miraflores in Caracas, while two Chilean journalists were deported.

Venezuela has been rocked by protests since Jan. 10 when President Maduro was sworn in for a second term following a vote boycott by the opposition.

In the wake of demonstrations and unrest in Venezuela, at least 268 protesters have been arrested across the country since Jan. 21.
News Desk Press Venezuela
Reactions: