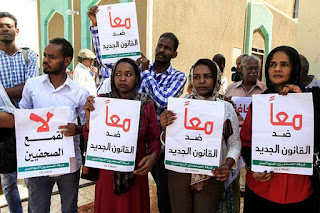 Sudanese journalists protest against a proposed new press law that aims to tighten restrictions on media freedom, at the headquarters of the National Council for Press and Publications in the capital Khartoum on November 15, 2017, carrying banners saying "United Against the New Law" and "No to repression of journalists" in Arabic. AFP

Sudanese authorities on Monday arrested 28 journalists as they attempted to deliver a petition protesting media censorship and repeated seizure of print-runs of a local publication to the national security and intelligence service, media watchdog confirmed.


“The journalists had organised a sit-in in front of the National Intelligence and Security Services (NISS) in Khartoum to protest the repeated confiscation of Al-Jareeda in the past weeks, however the security have arrested 28 of them and we don’t know their whereabouts so far,” said Mr Brkia.


At least ten editions of the publication have been seized by the authorities.


“As part of the continuing vicious attacks by Sudanese security forces against Sudanese doctors and medical staff, security have attacked Bahri General teaching Hospital and fired tear gas bombs and ammunition inside and in the vicinity of the hospital,” the doctors said in a statement.


“This is a typical repetition of the attack that took place against Omdurman hospital on January 9,” the statement added.


The association also said that more than 12 medical practitioners had been detained without charge since December 25 and called for their immediate release.


However, President Omar al-Bashir said Monday that ongoing protests will not lead to a change in government, as he addressed a rally in the Darfur city of Nyala.


"Demonstrations will not change the government...there's only one road to power and that is through the ballot box. The Sudanese people will decide in 2020 who will govern them," said defiant Bashir.


Deadly protests have rocked Sudan since mid-December sparked by a government decision to raise the price of bread.


At least 24 people have died in the protests, while rights group Human Rights Watch put the death toll at 40, including children and medical staff.
Africa Journalism News Desk