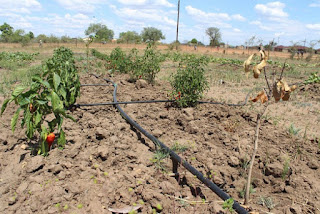 Farmers have faced dry conditions over most of the nation for the last year, even as they are still recovering from a disastrous El Nino-induced drought in 2015.

“We have basically reached a point now where we don’t have any more fat in the system. There is no buffer any more in the agricultural sector,” AgriSA boss Omri van Zyl told reporters.

Van Zyl said the group will also speak to the government’s National Disaster Management agency to get access to the contingency reserves.

A survey of producers showed that 31,000 jobs and 7 billion rand ($510 million) in potential revenue were lost since January last year because of drought, AgriSA said.

White maize prices are just off a near two-year peak last week.

“The farmers didn’t get enough (income) to recuperate in 2016 so the grain sector is in a lot worse financial situation than it was. Our ability to absorb this current drought is under pressure,” Jannie de Villiers, head of producers body Grain SA, also told reporters at the briefing.

In early estimates for the 2018/2019 season, farmers have planted around 95 percent of the country’s yellow maize, which is mainly used in animal feed, and between 70 to 80 percent of the white maize, pushing prices higher.

The white maize futures contract due in March traded up 2.76 percent to 3,088 rand on Friday, just under a near two-year high of 3,255 rand reached last week.

South Africa’s official Crop Estimates Committee, which in October estimated farmers would plant 2.448 million hectares of maize in the 2018/2019 season, is expected to release the preliminary area planted estimates on Jan. 29.