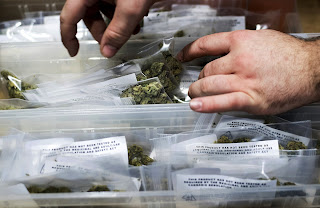 In this Jan. 6, 2018, file photo, an employee stocks cannabis at a store shortly before its first day of recreational marijuana sales in San Francisco. California has endorsed a rule that will allow home marijuana deliveries statewide, even into communities that have banned commercial pot sales. The rule finalized Wednesday, Jan. 16, 2019, by state officials was opposed by police chiefs and other critics who say it will create an unruly market of largely hidden pot transactions and encourage potential criminal activity. (AP Photo/Noah Berger, File)

The regulation by the state Bureau of Cannabis Control was opposed by police chiefs and other critics who predict it will create an unruly market of largely hidden pot transactions, while undercutting control by cities and counties.

Cannabis companies and consumers had pushed for the change, since vast stretches of the state have banned commercial pot activity or not set up rules to allow legal sales. That means residents in those areas were effectively cut off from legal marijuana purchases, even though sales are permitted for adults in California.

“The public spoke loud and clear in favor of statewide delivery,” cannabis bureau spokesman Alex Traverso said in a statement.

The rule cleared by state lawyers sought to clarify what had been apparently conflicting law and regulations about where marijuana can be delivered in California, which kicked off broad legal sales last year.

Proposition 64, the law approved by voters in 2016 that opened the way for legal pot sales for adults, said that local governments had the authority to ban nonmedical pot businesses. But state regulators pointed to the business and professions code, which said local governments “shall not prevent delivery of cannabis or cannabis products on public roads” by a licensed operator.

The cannabis bureau had said it was merely clarifying what had always been the case: A licensed pot delivery can be made to “any jurisdiction within the state.”

The League of California Cities had opposed the rule, arguing that it would gut local control, overriding local regulations or bans.

It’s likely the dispute will end up in court, or play out again in the Legislature.

Josh Drayton, of the California Cannabis Industry Association, said a patchwork of local rules in the state — some communities have embraced legal sales, while others have banned them — had created pot “deserts” where consumers were faced with long drives to find legal marijuana, edibles and other products.

The problem could be worse for the sick and frail who might not be able to leave their homes.

“At this point, you cannot stop regulated delivery services from entering a banned area to deliver to a consumer legally,” he said.

The rule was released as part of hundreds of pages of regulations governing the legal marketplace from growing to retail sales, which received final approval Wednesday. The state market had been operating under temporary rules.
California Indian Hemp Marijuana Society