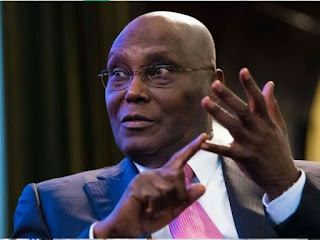 WASHINGTON (AFP)--Nigeria´s main opposition candidate Atiku Abubakar has put paid to rumours that he is unable to travel to the United States because of corruption allegations, by jetting to Washington for meetings with US counterparts.

The wealthy businessman, who is standing against President Muhammadu Buhari at next month´s election, arrived in the US capital on Thursday night, his media team announced.

The trip, which was shrouded in secrecy, effectively ends speculation that he could not obtain travel documents or feared being arrested over the graft claims.

"Former Nigerian Vice-President Atiku Abubakar has arrived in the United States," his media team said in a short statement.

The 72-year-old Abubakar and his delegation were later seen in photographs at the airport and arriving at the Trump International Hotel, a stone´s throw from the White House.

Among those travelling with him was Senate leader Bukola Saraki, who is Nigeria´s third-most senior politician behind Buhari and his deputy Yemi Osinbajo.

Like Abubakar, Saraki defected from Buhari´s ruling All Progressives Congress (APC) to the Peoples Democratic Party (PDP), after strained ties with the government.

Meetings are planned with "a high-powered, bi-partisan delegation of US congressmen who are deeply concerned and troubled about the future of democracy in Nigeria", the statement said.
- ´Harassment of opposition leaders´ -

Smith, who chairs the House of Representatives Foreign Affairs Subcommittee on Africa, last month said he was "very concerned by the current trajectory in Nigeria" and Buhari´s "apparent crackdown on non-violent protests and harassment of opposition leaders".

Abubakar has also alleged the ruling party has intimidated opposition candidates and claimed the APC is looking to rig the result.

Smith has previously spoken out on extremist violence in Nigeria.

Abubakar has faced repeated claims of corruption from his time as head of Nigeria´s customs service and as vice-president to Olusegun Obasanjo from 1999 to 2007.

He has never been charged and denies all allegations.

In 2010, a US Senate investigation cited him in a money-laundering case.

Between 2000 and 2008, his fourth wife, a US citizen, helped Abubakar funnel $40 million in suspect funds to the United States via offshore accounts, the report said.

Abubakar earlier this week pledged to fight corruption, which has been a key plank of Buhari´s administration since his election in 2015.

Buhari, 76, has pledged to recover what he said were "mind-boggling" sums of looted public funds, leading to the arrest of dozens of former government officials.

But his fight against graft has been criticised as a political witch-hunt against the PDP.