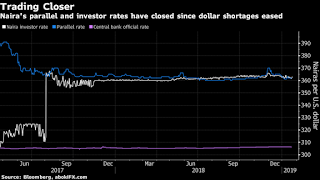 ABUJA (BLOOMBERG) -- A free float of Nigeria’s naira would cause capital flight and a “massive devaluation,” according to central bank Governor Godwin Emefiele. The nation’s current system of multiple exchange rates had produced the “most optimal results when compared with other emerging markets in recent times,” Emefiele told reporters Tuesday after a meeting of the Monetary Policy Committee.

Emefiele was responding to criticism last week from Atiku Abubakar, the main opposition candidate in next month’s presidential election. Abubakar, a businessman and former vice president, said in an interview with Bloomberg he would float the currency if he wins the Feb. 16 vote and replace Emefiele in June, when his first term ends.

Under Emefiele, who was appointed in 2014, Nigeria has tightened capital controls and closely managed the naira’s value. The governor has consistently said this is the best way to curb inflation and boost manufacturing by discouraging imports. Several foreign investors have faulted the policy and said it exacerbated an economic downturn triggered by the 2014 crash in oil prices. The MPC held its

Emefiele, 57, also said the central bank would increase restrictions on companies buying foreign exchange for imports. That would include putting more food items on a list of foreign goods for which purchases of dollars from banks are banned, he said. “We will get even more aggressive,” he said. “This is because we think the initiative the central bank has to cut imports and diversify the economy is yielding results."

Shortages of foreign exchange have eased in the past 18 months thanks to higher crude prices and the central bank opening a currency-trading window for portfolio investors that allowed them to buy the naira at a weaker level. The rate in that window has almost converged with the black-market one of around 360 per dollar, which means there probably wouldn’t be a substantial depreciation if the naira were floated, according to Standard Chartered Plc.

“We do not think the Nigerian naira is substantially overvalued at current levels,” said Razia Khan, Standard Chartered’s London-based chief economist for Africa. The closing of the spread between the rates in the parallel and investor markets “suggests that it is close to fair value,” she said.