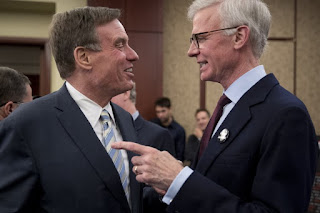 WASHINGTON (AP) — Members of Congress called for the protection of press freedom around the world Thursday as they honored a U.S.-based Saudi columnist who was killed inside his country’s consulate in Turkey in October.

House Speaker Nancy Pelosi, Rep. Adam Schiff of California and Sen. Mark Warner of Virginia were among those attending an event at the Capitol marking 100 days since the slaying of writer Jamal Khashoggi.

Pelosi said Congress is committed to seeing that the people responsible for his killing are held accountable.

“We must honor our moral responsibility to safeguard the lives and liberties of journalists both at home and abroad,” she told a room of lawmakers, journalists and activists.

“If we decide that commercial interests should override the statements that we make and the actions that we take then we must admit that we have lost all moral authority,” she said.

Khashoggi wrote op-ed columns for The Washington Post that were critical of the government of his native Saudi Arabia and his killing has strained the decades-long ties Saudi Arabia enjoys with the United States. Post Publisher Fred Ryan also was at the event.

Pelosi called on the U.S. to stand up to threats against journalists everywhere and pledged that U.S. lawmakers would work as long as it takes until there is justice for Khashoggi.

As lawmakers have turned up pressure on the U.S. to punish the kingdom, Trump Administration officials have argued Saudi Arabia serves as a bulwark in combating aggression from Iran that threatens the United States.

Khashoggi, 59, entered the consulate Oct. 2 as his fiancée waited outside.

Saudi Arabia denied for weeks that Khashoggi had been killed but later changed its story and ultimately acknowledged the brutal slaying.

The kingdom indicted 11 people over the killing and announced last week that it will seek the death penalty against five of them.

Khashoggi’s body, believed to have been dismembered after his killing, has yet to be found.
Associated Press Jamal Kashoggi Journalism News Desk Society