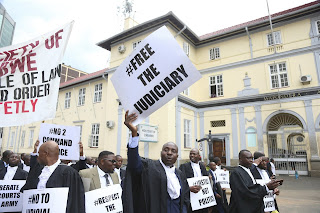 Zimbabwe lawyers take part in a protest over rule of law concerns in Harare, Tuesday Jan. 29, 2018. The lawyers handed over a petition to the country's Chief Justice in a bid to stop human rights abuses in the country. Zimbabwe's president Monday said he was "appalled" by a televised report showing abuses by security forces in a continuing crackdown after angry protests against the government's drastic fuel price hikes. (AP Photo/Tsvangirayi Mukwazhi)

BY FARAI MUTSAKA
HARARE, ZIMBABWE (AP) — Lawyers in Zimbabwe marched on the constitutional court on Tuesday to protest the alleged denial of justice for hundreds of people arrested in a violent crackdown on protests that shut down the country.
Police said more than 1,000 people have been arrested over the protests against a sharp rise in fuel prices that began two weeks ago. Lawyers say many are languishing in jail after being denied bail while others have been forced into unfair hearings across the country.
Human rights lawyer Beatrice Mtetwa described the judiciary’s actions as “well-coordinated” to punish suspects.
Dozens of gown-wearing lawyers marched in the capital, Harare, as riot police watched. “Liberate the courts from the army,” one of the lawyers’ signs read. “No to command justice,” read another.
Some lawyers gagged their mouths with pieces of paper inscribed with the word “injustice.”
The lawyers petitioned Zimbabwe’s chief justice, Luke Malaba, saying that “it has become commonplace to hear of denial of basic fundamental rights and freedoms of those arrested and suspected of having participated in the protests.”
The lawyers asserted that abuses by the military and police include abductions of suspects or close relatives, the assault and torture of suspects to induce confessions, the denial of treatment for tortured suspects.
Reports of alleged abuses by security forces continued, with the military heavily deployed in poor and working-class suburbs.
Main opposition leader Nelson Chamisa asserted to reporters that the arrests are meant to “cripple” his party, which has unsuccessfully sought dialogue with President Emmerson Mnangagwa after narrowly losing a disputed election last year.
Chamisa said his party had reported the issue to the southern African regional bloc, with no response.
“I don’t know how many bodies are supposed to be killed, I don’t know how much blood is supposed to flow in Harare,” he told reporters.
Police spokeswoman Charity Charamba rejected Chamisa’s allegation, pointing out that some ruling party activists had been arrested and convicted for burning a bus amid the unrest.
After reports of women being raped by security forces in the crackdown, Charamba said police were investigating one case of alleged sexual abuse. She urged victims of rape to report it to police.
Many victims of sexual violence are reluctant to approach the police or government hospitals for fear of reprisals.
___
Follow Africa news at https://twitter.com/AP_Africa
Copyright © 2019 The Associated Press. All rights reserved. This material may not be published, broadcast, written or redistributed.
Africa AP Judiciary Society Zimbabwe