Italy: 5 EU Nations Will Take In Migrants Stranded At Sea 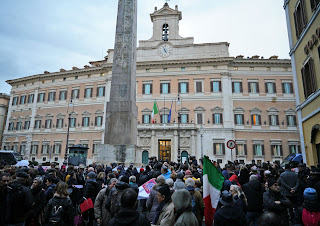 Protesters gather during a demonstration in support of German humanitarian group Sea-Watch, in front of the Italian lower chamber’s Montecitorio palace, in Rome, Monday, Jan. 28, 2019. A Sea-Watch rescue ship that picked up 47 migrants off the Libyan coasts on Jan. 19, was allowed to shelter in the Italian territorial waters due to threatening weather last Thursday, but the government refuses to let aid groups disembark the migrants in Italian ports. (AP Photo/Andrew Medichini)

Conte said Tuesday that the crisis over the Sea-Watch 3, which has been stuck off Sicily with 47 rescued migrants since Friday, demonstrates the EU’s “incapacity to manage this phenomenon with shared European mechanisms.” He spoke Tuesday in Cyprus at the close of a southern European summit.

But Conte said individual countries had stepped forward late Tuesday to say they would take some of the migrants. The Italian news agency ANSA, citing Conte, said the five countries are Germany, France, Portugal, Romania and Malta.

There was no immediate word on when or where the migrants, who were rescued Jan. 19 off the coast of Libya, would disembark.

Conte was to meet with the leaders of Italy’s two governing coalition parties, including hard-line Interior Minister Matteo Salvini of the League party, upon his return to Rome.

Italy’s populist government has refused to allow humanitarian ships to dock in its ports in a bid to force its European partners to share the burden of arrivals.

During the same press conference as Conte, French President Emmanuel Macron said France abided by three principals: respect for humanitarian rights in maritime matters, disembarkation at the nearest port and distributing the migrants. He said these standards should become a permanent mechanism.

The Dutch-flagged Sea Watch 3, which is operated by a German humanitarian group, was allowed into Italian waters late last week off the Sicilian port of Syracuse due to deteriorating weather conditions.

Human rights activists and some politicians have denounced Italy’s refusal to allow the migrants to land as inhumane.

“The psychological conditions of these people is worsening quickly. They need to get immediate medical attention on land,” EU lawmaker Cecile Kyenge told Sky TG24.

Earlier Tuesday, Europe’s human rights court denied a request by the head of the Sea Watch group, the Sea Watch 3′s captain and one of the migrants to disembark the 47 migrants.The European Court of Human Rights in Strasbourg, France, however requested in its decision that Italy “take all necessary measures as soon as possible” to give the migrants adequate medical care, food, water and supplies. And it said the 15 unaccompanied minors on the boat should receive legal guardianship.

Transport Minister Danilo Toninelli claimed on Twitter that the human rights court had sided with Italy.

“We must guarantee the migrants food, treatment and adequate assistance. And that is what we are doing. But we don’t have an obligation to disembark,” he said.

In another similar instance, Salvini faces possible charges for failing to allow 177 migrants to disembark at a port in Catania in August.

Prosecutors have declined to press charges for kidnapping and abuse of office, saying Salvini was enacting government policy beyond the scope of the courts. But a judicial review body ruled otherwise, and has asked the Senate, where Salvini has a seat, to allow the case to procced.

The migrants in that case were allowed to disembark after five days.