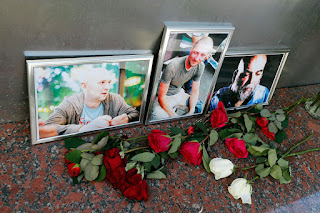 "The Investigation Management Center (IMC) web project promised a reward of $20,000 to the Russian journalists if they shoot a documentary in the CAR, considered to be one of ten most dangerous countries in the world. Nevertheless, no protection was provided to the journalists who arrived in the country on tourist visas and did not receive credentials," Petrenko said.

According to the Russian Investigative Committee, IMC members contacted Kirill Romanovsky who gave them a telephone number of the so-called fixer named Martin. Romanovsky promised to provide accommodation and a driver to the journalists during their stay in Africa. Petrenko noted that the three arrived in the country’s capital of Bangui on July 28, 2018, which was two days before the planned date, and failed to meet with Martin.

Their driver testified that he had met the Russian journalists in one of Bangui’s cafes on the day of their arrival. "Since he knows English and has a pickup truck, the journalists suggested he accompany them on their trips around the country. The fixer named Martin was not involved," Petrenko said, adding that the driver had no connection to the CAR Gendarmerie.

"On July 30, 2018, the journalists departed from Bangui to the city of Sibut where they arrived the same night. When they were leaving the city, Central African military servicemen warned them that it was dangerous to travel at nighttime but the Russians continued their trip, saying they were short of time," the Investigative Committee’s spokesperson continued.

She noted that even military patrols preferred to refrain from night trips, given the large number of gangs active in the country. "A group of armed black men who spoke Arabic stopped the car near a village 23 kilometers from Sibut. The attackers ordered everyone to get out of the car and demanded they gave up all of their belongings, photo and video devices. When the Russians refused and tried to resist the attack, they were gunned down, while the driver managed to flee the scene in the car," Petrenko explained.
Assistance in investigation

According to Petrenko, the investigation sent requests for legal assistance to the Central African Republic’s law enforcement agencies, which were partially fulfilled. "The car was examined, witnesses who had seen the journalists in Bangui and Sibut were questioned. All the cars passing through that checkpoint in Sibut are also being checked, as well as those that were present in the area on the night of the murder," she said.

The investigation is now working to identify the murderers of the Russians. "It must be said that by initiating media reports on the matter, the Investigation Management Center project clearly seeks to justify the mistakes it made during preparations for the trip, this is why it prefers to put forward its own theories and accuse the innocent," Petrenko said.
Russian journalists’ death

The bodies of three men were found near the city of Sibut (300 kilometers north of Bangui) on July 30. The Russian Foreign Ministry said later that the three had been carrying press cards in the names of Kirill Radchenko, Alexander Rastorguyev and Orkhan Dzhemal.

The Russian Investigative Committee launched a criminal investigation into the murder and sent an investigation team to Africa. Editor-in-chief of the Ekho Moskvy (or Echo of Moscow) radio station Alexei Venediktov told TASS that journalist Orkhan Dzhemal, cameraman Kirill Radchenko and director Alexander Rastorguyev had been working on a documentary in the Central African Republic.