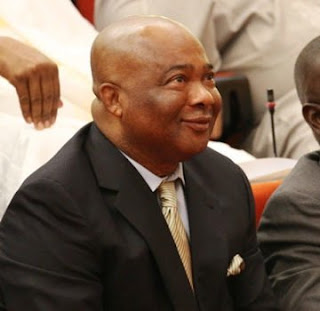 Hope Uzodinma image via The Nation

The state Chairman of the party, Hon Daniel Nwafor, who announced the expulsion during a media briefing at the party’s secretariat, said that the action became necessary to save the party from disintegration.

According to him, it has been established that the APC governorship candidate is sponsoring opposition candidates against the party’s candidates in the state, adding that such action is capable of ruining the chances of the APC in the elections.

“Senator Hope has been sponsoring the All Progressives Grand Alliance (APGA) Senatorial candidate, Senator Osita Izunaso as against the APC Senatorial candidate in Imo West, Governor Rochas Okorocha, he has also been running parallel Exco in his Omuma Ward and issuing party cards without recourse to party Exco”, Nwafor alleges.

A statement jointly signed by the Chairman (Daniel Nwafor) and the Secretary, Hon Obioma Ireagwu, reads “this is to inform you that the All Progressives Congress (APC) Omuma Ward of Oru East Local Government Area in Imo State has expelled Senator Hope Uzodinma from the party due to certain inordinate and anti-party activities perpetrated by him and his cohorts.

He continued that, “we will not allow one candidate to jeopardize the chances of our other candidates who are vying for various positions across the state. We have communicated the National Working Committee of our party on our decision and we have also instructed all APC members in the state not to have anything to do with Senator Hope Uzodinma and his ambition forthwith”.
Igbo Imo State Owerri Politics The Nation