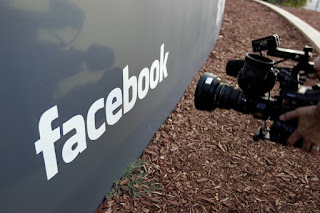 In this May 18, 2012, file photo a television photographer shoots the sign outside of Facebook headquarters in Menlo Park, Calif. Facebook says it has removed 783 Iran-linked pages, accounts and groups from its service for what it calls “coordinated inauthentic behavior,” that is, misrepresenting who is running the accounts with the intent of disrupting politics and elections. (AP Photo/Paul Sakuma, File)

NEW YORK (AP) — Facebook says it has removed 783 Iran-linked pages, accounts and groups from its service for what it calls “coordinated inauthentic behavior.” That’s the social network’s term for fake accounts run with the intent of disrupting politics and elections.

Facebook has been disclosing such purges more regularly in recent months, including ones linked to groups in Myanmar , Bangladesh and Russia .

The accounts on Facebook and Instagram typically misrepresented themselves as locals in more than two dozen countries ranging from Afghanistan, Germany, India, Saudi Arabia and the U.S.

Facebook said Thursday the accounts spent about $30,000 on advertisements, paid for in U.S. dollars, British pounds, Canadian dollars and euros.

Such cooperation can help the companies avoid regulatory scrutiny by showing critics and lawmakers that they can set aside differences when it comes to battling outside threats that affect their users.