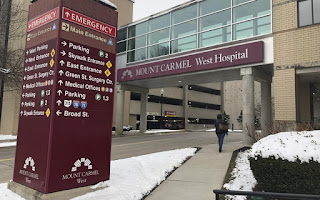 In this Jan. 15, 2019 file photo, the main entrance to Mount Carmel West Hospital is shown in Columbus, Ohio. The Columbus-area Mount Carmel Health System said a doctor's orders for potentially fatal doses of pain medicine given to over two dozen patients were carried out by what he calls "a small number of good people who made poor decisions." Mount Carmel Health System said it fired the intensive care doctor, put six pharmacists and 14 nurses on paid leave pending further review and reported its findings to authorities. (AP Photo/Andrew Welsh Huggins, File)

Three patients died during those weeks after getting excessive doses ordered by Dr. William Husel, the Columbus-area Mount Carmel Health System said in a statement. The health system noted that it “should have begun a more expedited process to investigate and consider immediate removal” of the since-fired intensive care doctor after a report about him was received Oct. 25.

Mount Carmel also said it now knows of more affected patients — at least 34 over the past few years. It initially said that affected patients were near death and their families had decided to stop lifesaving measures. But now, it says it’s investigating whether some patients got excessive doses while they might still have had opportunity to improve with treatment.

Questions about that have been raised by some of the families who are suing Husel , the hospital and other medical staff who approved or administered the drugs. They’ve also questioned whether hospital employees misled them about their loved ones’ conditions.

The health system said it’s investigating whether the families received accurate information about patients’ conditions, potential treatments and their likelihood to recover.

“We are committed to being open and honest about what happened and what we are doing to ensure it never happens again,” the statement said.

The allegations have raised questions about whether drugs were used to hasten deaths intentionally or possibly illegally. At least four wrongful-death lawsuits allege that patients died because hospital employees either negligently or intentionally gave them inappropriately large doses of the powerful painkiller fentanyl, unbeknownst to the patients’ families.

Mount Carmel said 28 of the 34 patients received doses that were potentially fatal, and six got doses that were larger than necessary to provide comfort “but were likely not the cause of their deaths.”

The hospital previously apologized and said it put six pharmacists and 14 nurses on paid leave pending further investigation. It said Thursday that it anticipates more affected patients might be discovered as the review proceeds.

Meanwhile, the Ohio Department of Health is investigating on behalf of the U.S. Centers for Medicare and Medicaid Services, and the Franklin County prosecutor confirmed a local investigation.

Husel’s work also is under internal review by the Cleveland Clinic, where he was a supervised resident from 2008 to 2013. The medical center said its preliminary review found his prescribing practices were “consistent with appropriate care.”

Asked about Yost’s comments, medical board spokeswoman Tessie Pollock said the board can’t disclose confidential investigative information. But she noted that it works with the attorney general’s office in high-profile cases and coordinates with authorities about the timing of administrative actions to protect the integrity of possible criminal investigations.