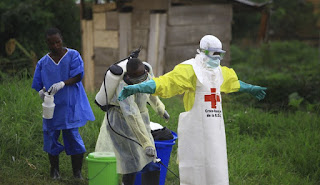 In this Sunday, Sept 9, 2018 file photo, a health worker sprays disinfectant on his colleague after working at an Ebola treatment centre in Beni, Eastern Congo. Congo's health ministry says a baby has been born to a mother who recovered from the Ebola virus _ a bright spot in an outbreak that is the second-deadliest in history. The health ministry tweeted a photo of "baby Sylvana" in her smiling mother's arms. The baby does not have the virus. The ministry says Sylvana is the first baby in this outbreak born to a mother who has recovered. (AP Photo/Al-hadji Kudra Maliro, file

JOHANNESBURG (AP) — A four-day-old baby is a surprise bright spot in Congo’s deadly Ebola outbreak, as the country’s health m
inistry on Thursday called her the first child born to a mother who has recovered from the virus.

“Baby Sylvana” is healthy and does not have Ebola, the health ministry said. It tweeted a photo of the baby, her tiny mouth open in yawn or cry, in her smiling mother’s arms.

The baby is the first in this outbreak born to a mother who recovered, the health ministry said. This is rare, though babies have been born to Ebola survivors in previous outbreaks. The mother was found to have the virus last month.

Baby Sylvana was born Sunday at an Ebola treatment center in Beni, a troubled city where rebel attacks have threatened health workers’ attempts to contain the outbreak. Community resistance in a wary region facing its first Ebola outbreak also has hurt the outbreak response, with misunderstandings, vandalism and even attacks on health workers common.

This outbreak has become the second-deadliest in history, with 628 cases, 580 of them confirmed. There have been 335 confirmed deaths. More than 57,000 people have received an experimental Ebola vaccine as health workers rush to track contacts of confirmed Ebola victims in a densely populated, turbulent region near the border with Uganda and Rwanda.

Amid the challenges, Congo’s health ministry has tried to highlight successes. Last month it announced that a baby admitted to an Ebola treatment center just six days after birth had recovered from the virus. The ministry called baby Benedicte, whose mother had Ebola and died in childbirth, the outbreak’s youngest survivor.

Experts have reported worryingly high numbers of children with Ebola in this outbreak. Children account for more than one-third of all cases, UNICEF said last month. One in 10 Ebola cases is in a child under 5 years old, it said, and children who contract the hemorrhagic fever are at greater risk of dying than adults.

In addition, hundreds of children have been orphaned in this outbreak.

Few cases of Ebola in babies have historically been reported, but experts suspect transmission might happen via breast milk or close contact with infected parents. Ebola is typically spread by infected bodily fluids.